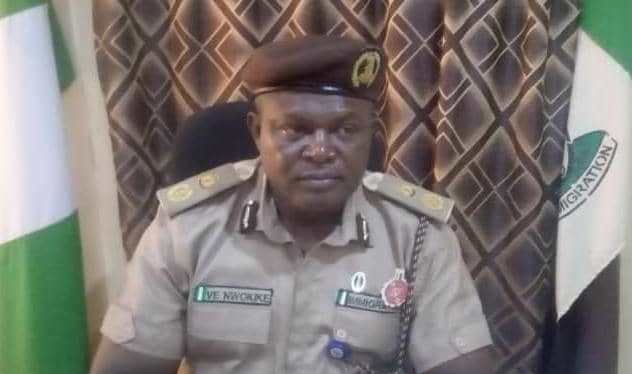 The Nigeria Immigration Service, Illela Border Command Sokoto state had between January and October this year  Intercepted over  30  Victims of Human Trafficking and suspected traffickers about to cross the Nigeria/Niger Border route to Europe.

The Comptroller of the command Mr. Victor Nwokike stated this in an exclusive Interview with our Correspondent at Illela town the headquarters of the Border Command.

He said the Victims were Intercepted at various times trying to cross the border into the republic of Niger as a result of tight security measures put in place at the Border by the Nigeria Immigration Service in collaboration with its sister Organizations which made it difficult for human traffickers assess illegal entry points at the border.

He said officers and men of the service have been conducting daily patrol and surveillance along the porous areas of the border on foot,  Motorcycles, and Hilux land cruisers to checkmate and track those trying to use illegal entry points with a view to apprehending them.

“Since when the new command commenced operation barely a year ago, “we have kept the National Agency for Prohibition of Trafficking in Persons  (NAPTIP) busy with occasional handing over of Intercepted Victims of human trafficking”

He said lack of adequate manpower is the major challenge affecting the smooth conduct and effective surveillance of border areas under the command’s area of jurisdiction.

“We work in synergy with other security Organizations at the Border through shared information on the influx of illegal immigrants and prevention and control of human trafficking into the country.

“Our border entry point is highly secured and we would do everything possible to keep it safe against would-be terrorists and illegal aliens who may want to use our entry point to cross into the country to cause mayhem.

“We will ensure that those coming into the country are those with valid documents and doing legitimate businesses”: especially now that campaign for general elections had already kickstarted.”

The command will intensify efforts to prevent the illegal entry and smuggling of aliens in to the country, through strict enforcement of criminal provisions of immigration and nationality laws of  Nigeria, Mr. Nwokike reiterated.

He called on the border Communities to give intelligence information to the new command to enhance its operations and keep the border safe and secured.

‘Education is the best investment for politicians’ – Sen. Kwankwaso