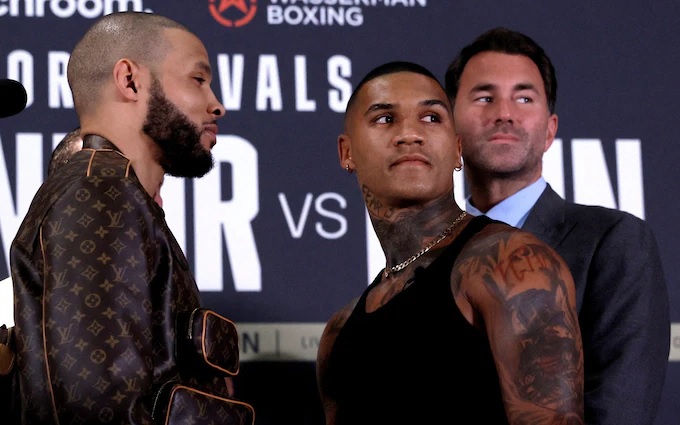 The fight between Conor Benn and Chris Eubank Jr, due to take place in London on Saturday, has been postponed.

It comes after Benn, 26, returned what promoters said was an “adverse analytical finding for trace amounts of a fertility drug”.

The British Boxing Board of Control had said the bout was “prohibited and not in the interests of boxing”.

Promoter Matchroom confirmed on Thursday that the fight had been postponed.

“After discussions with various parties, we have taken the decision to formally postpone the bout between Chris Eubank Jr. and Conor Benn,” Matchroom said.

“It is undeniable that the British Boxing Board of Control’s decision to withdraw their sanctioning was procedurally flawed and without due process,” it added.

“That remains a legal issue between the promoters and the Board which we intend to pursue.”

Benn, who insists he is a “clean” fighter, and Eubank were scheduled to meet in the ring at a catch weight of 157lbs, 30 years after their fathers Nigel Benn and Chris Eubank Sr fought.

Matchroom promoter Eddie Hearn had been seeking to overturn the BBBofC’s decision as both fighters’ camp said in a statement on Wednesday they wanted the fight to go ahead.

Following the decision to postpone the fight, Benn said on Twitter: “I am truly gutted that we were unable to make this fight happen on Saturday and I’m sorry to everyone who has been affected by the postponement.”

Benn added: “I am still completely shocked and surprised by this and it has been a tough couple of days.

“My team and I will consider the next options, including rescheduling the fight, but my immediate focus is on clearing my name because I am a clean athlete.”

Eubank Jr said: “Can’t believe it. I really apologies to the fans and everyone that bought tickets, travelled and booked hotels, this should not have happened. He has escaped his schooling… for now.”

Speaking at a delayed press conference on Thursday, Hearn said the decision had been made “in the best interests of the parties involved”.

“While we were desperate for this fight to take place, for the fans, for the undercard fighters, we made a decision we felt we had to at this time.”

Hearn had earlier ruled out seeking a new body to sanction the fight.

“It’s been done before and it’s not something I’ve looked at before or something I necessarily agree with,” Hearn said. “This is not a situation where we want to run rogue and come up with an alternative plan.”

The Matchroom statement said that “whilst there are legal routes to facilitate the fight taking place as planned, we do not believe that it is in the fighters’ interests for those to be pursued at such a late stage, or in the wider interests of the sport.”

It added: “As promoters, we take our obligations and duties very seriously, and a full investigation will now need to take place.”

Benn returned an “adverse analytical finding” for the fertility drug clomifene in August, following a test taken by the Voluntary Anti-Doping Association (Vada).

Clomifene can be used to boost testosterone levels in men and is banned inside and outside competition by the World Anti-Doping Agency (Wada).

Vada was hired by Benn and Eubank to provide extra testing alongside UK Anti-Doping, which is the Board’s officially anti-doping partner and adheres to Wada.

Eubank’s promoter Kalle Sauerland confirmed on Wednesday that both camps had known of the drug test results for several weeks and Eubank wanted to go ahead with the fight.

“We discussed it straight away with the most important person from our side, the athlete,” Sauerland said. “He was happy to continue and spoke to Benn directly.”

Speaking on Thursday, Sauerland said: “[Eubank is] hugely, hugely disappointed. He was ready, he was on weight and he was very much looking forward to this weekend.”

He added: “This matter was taken out of our hands. The handling of it, we feel, was totally inappropriate given the rules. We now look at the plans to reschedule it.”

Internally at Matchroom and their broadcasters DAZN, they are convinced Benn is innocent of intentionally doping.

Hearn argued that because the Board do not “recognize” VADA, they had no reason to call off the fight or suspend Benn.

Rumble added: “UKAD acts on all reports of doping and always encourages anyone with information on suspected doping activity to come forward and share that with us.”
(BBC)