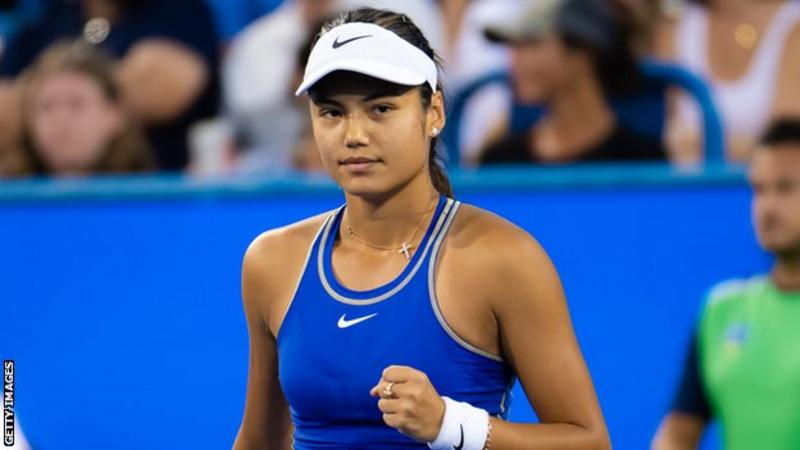 Raducanu continued her preparations for the forthcoming defence of her US Open title with a 6-0 6-2 win in Cincinnati.

The 19-year-old played Belarusian veteran Azarenka just 18 hours after beating Williams, who will retire after the US Open, 6-4 6-0 on Tuesday.

The Briton, ranked 13th in the world, will meet the American seventh seed in the last 16 of the Western and Southern Open on Thursday.

“I was playing a great match for sure and to play Vika I had to stay focused throughout,” said Raducanu, who beat 22nd-ranked Azarenka to earn her first top-30 win since last year’s US Open.
Raducanu stunned the sporting world with her unexpected triumph in New York last year, when she became the first qualifier to win a Grand Slam title in what was only her fourth senior tournament.

The victory propelled the previously little-known teenager into global superstardom, but she has since faced the difficulties often encountered by young players in their first full season on the WTA Tour.

Regularly hampered by fitness issues this year as she adjusts to the rigours of the senior tour, Raducanu arrived in Cincinnati with a record of 11 wins and 14 losses this season.

But with her fearless and accurate groundstrokes, she has so far shown a similar level in the WTA 1000 event to the one which led to her success at Flushing Meadows.

Pegula, however, is likely to provide a sterner test – and a more accurate appraisal of Raducanu’s current level – than Williams or Azarenka.

In what was her first career meeting with 23-time major champion Williams and likely to be the last, the teenager clinically took advantage of the 40-year-old’s lack of sharpness by hitting 14 winners and making just one unforced error in a ruthless victory.

After that night session, Raducanu returned to Cincinnati’s centre court against 33-year-old Azarenka and produced another dominant display.

The forehand continued to be a potent weapon, while she was also helped by wayward returning from the two-time Grand Slam champion.

After cruising through a 26-minute opener to record a second straight bagel, Raducanu raced into a 4-0 lead in the next set, before Azarenka finally got on the scoreboard with back-to-back holds.

She offered more resistance when Raducanu served for the match, earning two break points and saving a match point before the Briton clinched victory.

“In the second set I could feel the important moments and a couple of turning points that could have made the second set really difficult,” added Raducanu.

“I am really pleased with how I dug in, and serving it out in that last game was really difficult.”
(BBC)