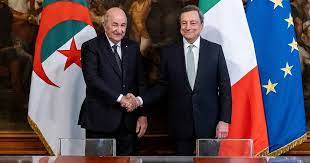 Algeria and Italy sealed approximately 15 major deals during a business summit between the two countries in Algiers. A new contract on gas supply worth $ 4bn was concluded. It aims to make the North African country, the southern European country’s biggest gas supplier instead of Russia.

“Algeria has long been a key country for our energy supplies. The agreement signed on energy cooperation shows our determination to achieve even more in this sector.”, commented Italian Prime Minister Mario Draghi. While his counterpart, Aïmene Benabderrahmane said his country would work to “strengthen partnerships and investments, particularly in the oil, gas and mining production sectors” with Italy.

Agreements in areas such as sustainable development, micro-enterprises and justice were also signed by the partners. All facilitated by a new law implemented by the Algerian government on foreign investment.

Since the beginning of the war in Ukraine, Rome has increasingly turned to Algeria to reduce its dependence from Russia. Algeria is Africa’s biggest gas exporter and provides around 11 per cent of the natural gas consumed in Europe.
(Africanews)