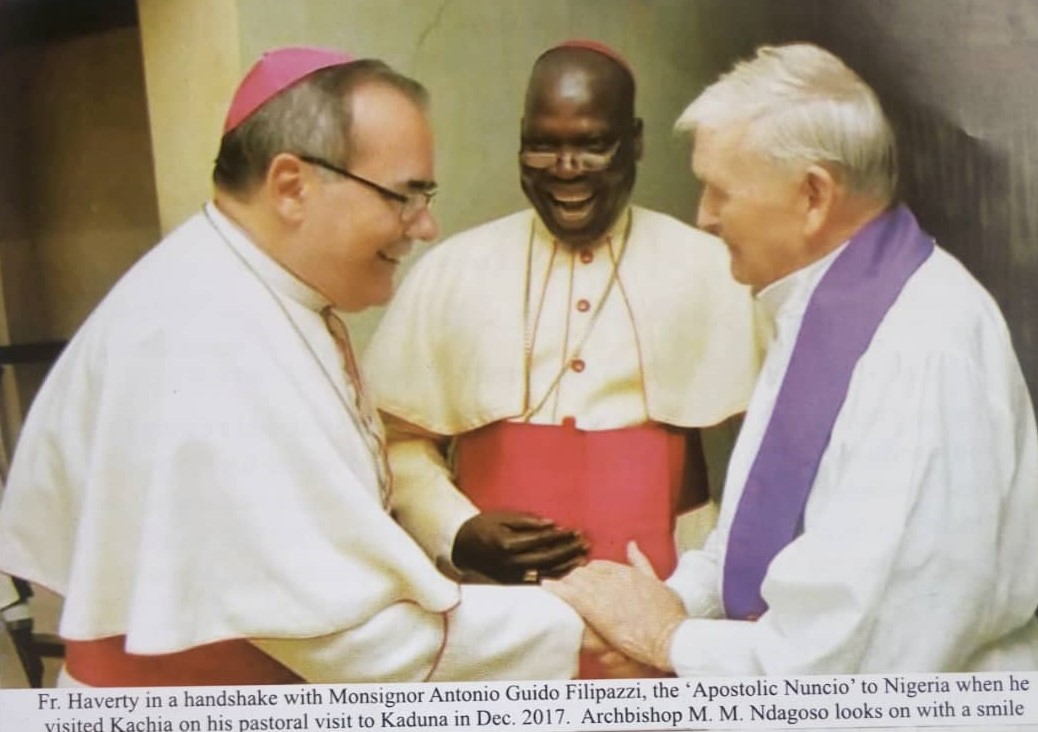 Born in 1936 in Ireland, John was for 57 years on assignment in Kaduna State on behalf of the SMA mission.

At the time of his death on 8th July 2019, he was one of the very few longest-serving SMA missionaries in Nigeria.

Haverty’s missionary vocation was largely influenced by the prayer-life of his family including the Rosary, as in his words, “this helped to create inside me an abiding desire to do something for the third world”.

What sustained John Haverty in his 61 years of missionary journey include the following:

Among the places, Rev. Fr. John Haverty served are:

An obscured, poorly staffed, poorly furnished, and lowly institution, Haverty brought up the school to higher standards in learning and character.

This made Fadan Kaje become that School where every parent struggled to bring his child to.

Among just a few of his products in Fadan Kaje are :

+ Sir David Y. Yashim (one of the pioneer planners of, and the FCT Master Plan)

GARLANDS FOR A RADICAL

For his meritorious service in Kaduna state, especially in his radical upliftment of Southern Kaduna to amiable heights Rev. Fr. John Haverty was highly admired, loved, respected, and revered.

He was severally recognized and decorated with garlands, honors, and awards by many of the communities he impacted.

One of such was the conferment on him of the chieftaincy title of ‘Agoh Tuma’ of Adara Chiefdom, a position that earned him a permanent seat in the Adara Traditional Council.

The Fadan Kaje spirit lives on.

Eternal rest grant unto him, O’Lord, and let perpetual light shine upon him.

Raheem Sterling: Why are Man City letting him go?