Davido spoils son with wristwatch worth over N150M 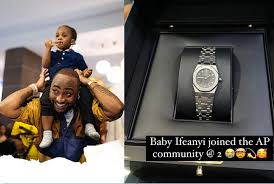 Nigerian singer David Adeleke popularly known as Davido has gifted his son, Ifeanyi a wristwatch worth over N150M.
The billionaire heir took to his Instagram Stories on Friday, June 17, 2022, where he shared a video of the new wristwatch.

It is no news that Davido is a collector of expensive wristwatches.

Over the last few years, we’ve seen the singer buy some pretty expensive wristwatches.
It would be safe to say Davido has one of the biggest and most expensive watches collections in this part of the world.

In 2018, he bought an expensive diamond-encrusted Franc Vila wristwatch.
While he was still exclusive with his estranged fiancé, Chioma Rowland, he gifted her a Patek Philippe Aquanaut Luce Watch which is estimated to cost $45,999.

Davido’s flamboyant lifestyle is one that can’t be compared to any other celebrity from this part of the world.

From his expensive fleet of cars to actually buying a private jet, the list is endless of the luxury properties in his will are not your everyday kind of properties.
(Pulse)