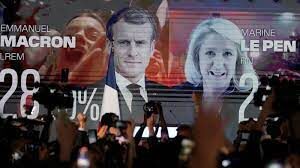 With the projections putting Macron in first place and Le Pen in second, the other major candidates conceded defeat on Sunday. Except for another far-right candidate, Eric Zemmour, they all urged voters to back the incumbent in two weeks’ time in order to block the far-right.
Le Pen, who had eaten into the president’s once-commanding 10-point poll lead in recent weeks, said she was the one to protect the weak and unite a nation tired of its elite.

“I intend without waiting to sew back up the tears that a torn-apart France suffers,” she told supporters, who chanted: “We will win!” The runoff “will be a choice of civilization,” Le Pen added on stage in Paris.
Macron won 28.1 to 29.5 percent of votes, while Le Pen won 23.3 to 24.4 percent of voter support, pollsters projected. The far left’s Jean-Luc Melenchon polled third, with approximately 20 percent, the projections showed.

Following the announcement of the projections, Communist Party candidate Fabien Roussel, Socialist Anne Hidalgo, Yannick Jadot of the Greens and right-wing Republicans’ candidate Valerie Pecresse said they would vote for Macron to prevent the far-right leader from coming to power.
“So that France does not fall into hatred of all against all, I solemnly call on you to vote on April 24 against the far-right of Marine Le Pen,” Hidalgo, who polled ninth with just under two percent of votes, said.

Pecresse also said she would vote for Macron, warning of “disastrous consequences” if he did not win the runoff.
Melenchon urged his supporters to refrain from voting for Le Pen in the runoff.

“We know who we will never vote for … Not a single vote must go to Mrs Le Pen,” he said at his party headquarters in Paris, stopping short of telling supporters they should back Macron.
Far-right candidate Eric Zemmour endorsed Le Pen, the only major candidate to do so. He acknowledged disagreements with Le Pen, but said Macron was a worse choice.

Political Commentator Pierre Huski said that Le Pen might be disappointed with the projected results announced.

Huski believes the gap between the estimated votes of Le Pen and Macron makes the former a weaker challenger than she imagined for the second round.

“The next two weeks will be pretty hard for her as she has to face the president, who is good at debating, on a televised debate,” he told Al Jazeera.
Not for two decades has a French president won a second term.

Barely a month ago, Macron appeared near certain to reverse that, riding high in polls thanks to strong economic growth, a fragmented opposition and his statesman role in trying to avert war on Europe’s eastern flank.

However, he paid a price for late entry into the campaign, during which he eschewed market walkabouts in provincial France in favor of a single big rally outside Paris. A plan to make people work longer also proved unpopular.
By contrast, Le Pen for months toured towns and villages across France, focusing on cost-of-living issues that trouble millions and tapping into anger towards the political elite.

A Le Pen victory on April 24 would lurch France, the European Union’s second-largest economy, from being a driving force for European integration to being led by a euro-sceptic who is also suspicious of the NATO military alliance.

While Le Pen has ditched past ambitions for a “Frexit” or to haul France out of the eurozone’s single currency, she envisages the EU as a mere alliance of sovereign states.

Who next holds the Elysee Palace will depend on how those who backed Macron and Le Pen’s rivals cast their ballots. In past elections in 2002 and 2017, voters on the left and right have united to block the far-right from power.
(Aljazeera)

Nigerian Idol Season 7 – who is next to Exit