tasks cadets to be valuable Nigerians 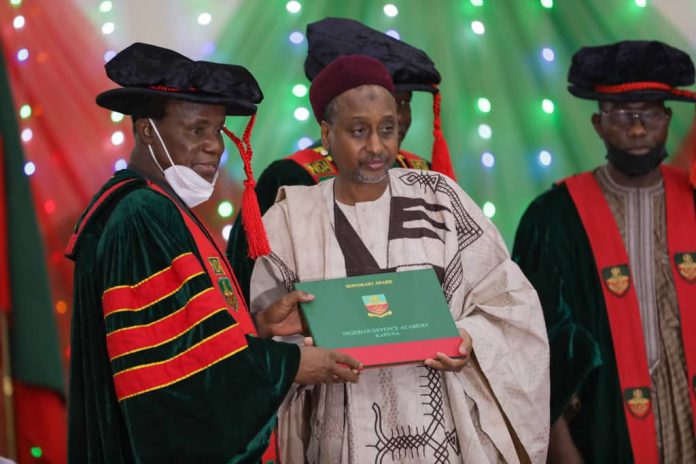 The Nigerian Vice President, Professor Yemi Osinbajo has restated the Federal government’s commitment to sustaining the tempo of funding and infrastructural development in the educational sector.

The Special Assistant to the Minister of Defence, Media and Publicity, Mohammad Abdulkadri in a statement, Thursday, made available to Stallion Times said Professor Osinbajo made the statement in a message to the 31st convocation ceremony of the Nigerian Defence Academy, NDA, Kaduna in honour of the Cadets of the 68 Regular Course held at the Academy Auditorium.

The Vice President who was special guest of honour at the ceremony was represented by the Minister of Defence Maj Gen Bashir Salihi Magashi (rtd) who doubles as the Chairman NDA Council said the present administration of President Muhammadu Buhari has invested vital resources in meeting globally acceptable standard in all facets of education, economy and polity.

While appreciating the enviable status of the Nigerian Defence Academy as the foremost military University and a great citadel of learning in sub- Saharan Africa, he tasked the leadership of the institution to accord priority attention to the teaching of modern military science.

He appealed to Nigerians to renew hope in Nigeria adding that great Nations never succumb to momentary challenges such as social upheavals, religious intolerance and economic hardship facing the country.

In his welcome address the Commandant, Nigerian Defence Academy Maj Gen Ibrahim Manu Yusuf said the Institution has made remarkable and sustainable academic progress and infrastructural transformation since its establishment in 1964.

General Yusuf vouched for the Cadets and other graduates pointing out that they are well equipped with requisite knowledge and good characters to navigate the turbulence of life and to contribute their quotas to nation building.

The Minister of Defence, Maj. Gen Bashir Salihi Magashi who has the pedigree of being a former Cadet Brigade Commander and former NDA Commandant between 1998 and 1999.

He performed the statutory Council’s Chairman duty in line with the well-established academic Protocols and tradition by conferring awards of Diplomas and Degrees Certificates on the Cadets, Civilian graduates and Honourary PhD awards on the business mogul, Aliko Dangote.

After admitting the graduands into the hall of fame of the prestigious NDA Alumni and the unveiling of the Academy Book Series on Defence and Security.