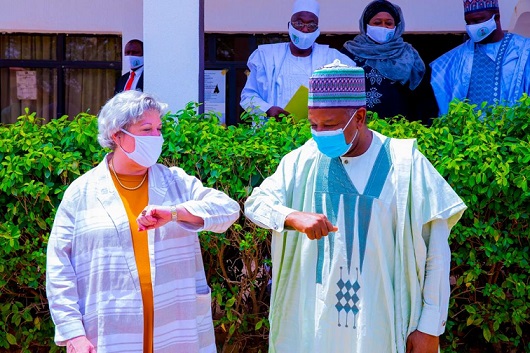 Gov. Bagudu of Kebbi state and US Ambassador to Nigeria, Mary Beth Leonard

Kebbi State Governor, Abubakar Atiku Bagudu, has extolled the existing robust bilateral relations between Nigeria and USA, as he sought for more support from that country.

Bagudu spoke in Kebbi, when the US Ambassador to Nigeria, Mary Beth Leonard, paid him a courtesy visit at the government house in Birnin kebbi

The Chairman, Progressive Governors’ Forum, who expressed gratitude for the visit said: “I am appreciative of the sound relationship between Nigeria and the US, in all the areas of cooperation.

“Over the decades, our ties and shared values for human ideals had further cemented the bonds that existed between the two countries.

“This visit is a further step towards deepening our economic and democratic ties of our nations.”

The Governor further noted with happiness that, Kebbi State has been a major beneficiary of a lot of support from the US, officially and unofficially.

He averred that, Kebbi shares common borders with Niger and Benin Republics, with some attendant opportunities and challenges.

He cited some of the challenges to include the perennial movements of pastoralists from as far as Mali, saying. ” It’s a very important economic opportunity and challenges.

“Kebbi State is a recipient of out of school children from its neighbours, Niger and Benin Republics.”

Bagudu also noted that, Rivers Niger and Rima that span across the state also present some opportunities and challenges.

He also bemoaned occasional rifts among farmers, pastoralists and fishermen, occasioned by the dearth of enough fresh waters, land and pasture, disclosing that, his administration was working hard to assist them, as well as redress the ugly situation.

Bagudu further averred that, the state was not unaffected by the raging banditry, adding,” we have however fared better, although this doesn’t call for celebrations yet.”

He also expressed delight that the state was renowned for a number of crops, Fisheries and Animal Husbandry.

He acknowledged the support of the US Feed the Future Program, under the Michigan State University which conducted a study that showed that, yields have been improving in the state.

This, Bagudu said, was because of combination of changes in agronomic practices sequel to the support of USAID, that include use of better seeds, more investments in seeds and Technology.

According to him, the study had bolstered investor confidence in the state, among others.

Bagudu also said that, the state had in 2017 signed an Agreement with the US Africa Development Foundation, to support capacity Building in three areas of Dairy, Rice and Groundnut Production.

He also cited the state’s partnership with NNPC and CBN on ethanol Production, in both sugarcane and cassava, as biofuel.

Bagudu also stated that, the state boasts of various large- and small-scale rice Mills, while the state government was also assisting women rice farmers with machineries, to square up in quality rice milling.

While commending the US for its sustained support in various health thematic fields, especially in malaria prevention.

He also appreciates myriad of other forms of support from the US, Bagudu said,” Kebbi as a sub national entity appreciates American democracy and system of governance.

” We want to see more engagements especially the capital market, as this will lead to more economic opportunities for both countries.”

Bagudu therefore, sought for more US support in climate change, green house emissions and taming desertification, among other environmental issues.

The US Ambassador, Madam Mary Beth Leonard had earlier said that, the visit was aimed at reinvigorating the existing relationship between the two countries, as well as boost extant partnerships.

She stated that, it was also aimed at exchanging ideas to improve the existing situation, as well as to see the good works the US was doing across Nigeria

” We are àlso here to see how the state is faring, assess strengths and weaknesses, as well as explore areas of moving forward,” she explained.

The US Envoy further said that, the Michigan State University was identifying ways and detailed information so that it can have real impact on agricultural Production.

The US Ambassador also cited a lot of expertise in dealing with many of the kinds of the situations Nigeria is now experiencing, for example; conflicts over resources.

“The premise of the Trade Hub is to hold on to a small number of value chains where research has shown that, we can do more, like rice and soya beans.”

She also expressed delight that, the US African Development Program was able to expand into more products basis.

Beth added that, the economic disruption of the COVID-19 was why the US made a dramatic increase in the resources available to the trade Hub.

She disclosed,” it has been recognized that, there is the need to give more aggressive support to producers, to help them to increase their products and inspire the two-way trade.”

On the vulnerability of climate change, the US Ambassador said that, the US had re-joined the Paris Club, while President Joe Biden had about a month ago invited President Muhammadu Buhari to the Climate Summit.

“It is very important and there is the urgency to identify places where, together we can make differences on emissions, recognizing the impact of the changing climate on people’s livelihoods and we look very much to continuing this.”

On security, the Envoy said that, there are many answers to the security situation in Nigeria, saying,” the answers are as diverse as there are places in Nigeria as the scopes of the challenge are different.”

Beth noted with happiness the multifaceted approach of Bagudu in understanding the different kinds of people, activities, professions and how to interact with them.

She also spoke on the recent passage of the Police Reform Bill and its emphasis on community policing, as well as calls by many states to think about a different model, to allow more than Federal Level Policing.

” I also welcome observations, particularly on agriculture and health, as to how you see how we are doing and if you see gaps and opportunities that we should address more aggressively,” the US Envoy, averred.

The Commissioners of Health, Hon. Jafar Muhammad, Agriculture, Hon. Abdullahi Maigari Dakingari and that of Justice and Attorney General of the State,Hon Ramatu Adamu Gulma as well as Special Adviser on Security retired Major Garba Rabiu Kamba took turns to explain areas of achievements and challeges that require US support.

Highlights of the visit include presentation of souvenirs to the visiting US Ambassador and her entourage by the governor.

The visit was rounded up in Argungu for the launch of Co-Investment Partnership between USAID and WACOT Rice Limited performed by the American Ambassador, to Nigeria Madam Mary Beth Leonard.

Senate to NECO: Show receipt for N7.2bn within 24hrs or make refund

Gov. Elrufai: The Ambiguities in Defense of Kaduna’s Mass Sack