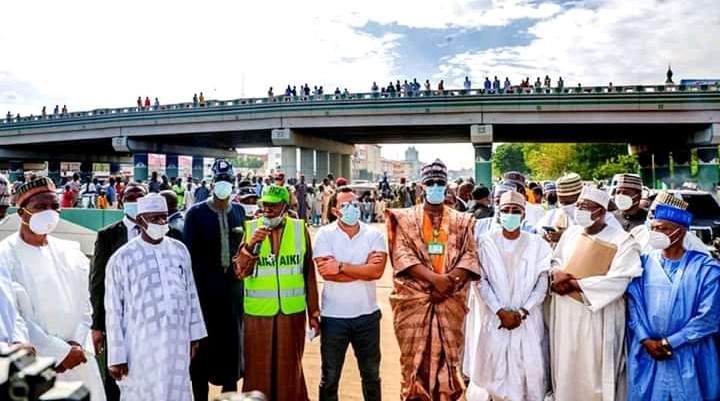 The construction of Dangi Three-Layered interchange flyover, with underpass and surface-leveled modern road, among other state-of-the-art flyovers beautifying the ancient city of Kano coupled with other rural based infrastructures, are part of the manifestation of the Kano reviewed master plan.

This was contained a press statement signed by Abba Anwar, Chief Press Secretary to the Governor of Kano State and made available to Stallion Times.

“Though, the state like all other state in the federation, is faced with the challenges posed by the global pandemic of Covid-19, we should still not allow it to be a stumbling block between us and development. Ours is commitment and dedication for our dear state,” he stated.

The statement further revealed that while Dangi flyover has reached almost hundred percent completion stage within the specified time allocated to the giant project, which gulps over N4 Billion; it would be commissioned by President Muhammadu Buhari in his encouraging disposition to the Governor’s performance for the development of the state.

The hasty and committed nature of the projects, are all in line with his administration’s commitment towards practically ensuring that, “…the reviewed Kano Master Plan becomes a reality and workable for the state to have more modern look and compete favourably with other global cities,” he said.

Together with the newly inaugurated Commissioner of Works and Infrastructure, Idris Garba Unguwar Rimi, with other commissioners, governor Ganduje assured that, he would do everything humanly possible to see that the facelift process is not halted for whatever reason.

While Sheikh Qariballah flyover, that reaches an appreciable stage, is designed to principally link the two sides of the famous Murtala Muhammad Specialist Hospital, – a hospital with over four thousand (4,000) bed capacity.

It also links the Rimi market with some Kano major markets of Kwari and Kofar Wambai. While it serves as a major link between the city, from the Kano Emirate side, where Kano Central Mosque is located, and the popular Kano Dye Pit of Kofar Mata general area.

All these human-centred infrastructural development, according to the governor, are put in place to accentuate the reviewed state master plan.

Adding that, “If you were in Kano before we took over power in 2015 and have a cause to visit Kano today, you will surely miss your road or link to your destination. Our facelift, which is centred around development, is of global standard.”

“This flyover around Kofar Mata/Kwari market is designed to, apart from beautifying this business area, it will also decongest the areas that link Kwari market with Kofar Wambai market and Singer market,” he highlighted.

The company handling the project TRIACTA Nigeria Limited, assured the governor and the people of the state, quality work and in tandem with global best practice.

It concluded that hundreds of people gathered to show solidarity and express their gratitude to the governor for the surprise visits to the construction sites, they assured him of their continued cooperation with the company handling the projects in their areas.