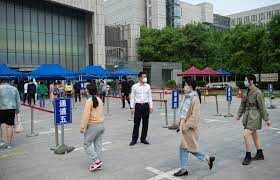 Frustration simmered in China among residents and business groups navigating stricter COVID-19 control curbs as the country reported on Friday another historic high of daily infections just weeks after hopes were raised of easing measures.

The resurgence of COVID cases in China, with 32,695 new local infections recorded for Thursday as numerous cities report outbreaks, has prompted widespread lockdowns and other curbs on movement and business, as well as pushback.

The French Chamber of Commerce in China called for authorities to properly implement COVID “optimization” measures it announced two weeks ago, in a statement widely shared on social media after the French embassy posted it on its Twitter-like Weibo account on Thursday.

The 20 measures, which include shortened quarantines and other more targeted steps, had “given hope” to French companies for more bilateral trade and economic exchanges, but “good policies also need to be implemented in a uniform manner and without adding layers of other contradicting policies”, the chamber’s statement said.

The announcement of the 20 measures, just as rising cases prompted an increasingly heavy response under China’s strict zero-COVID approach, has caused widespread confusion and uncertainty in big cities, including Beijing, where many residents are locked down at home.

At the world’s largest iPhone factory in Zhengzhou, more than 20,000 new hires have left after COVID-induced worker unrest this week, further imperilling output at Apple supplier Foxconn’s plant there, Reuters reported on Friday