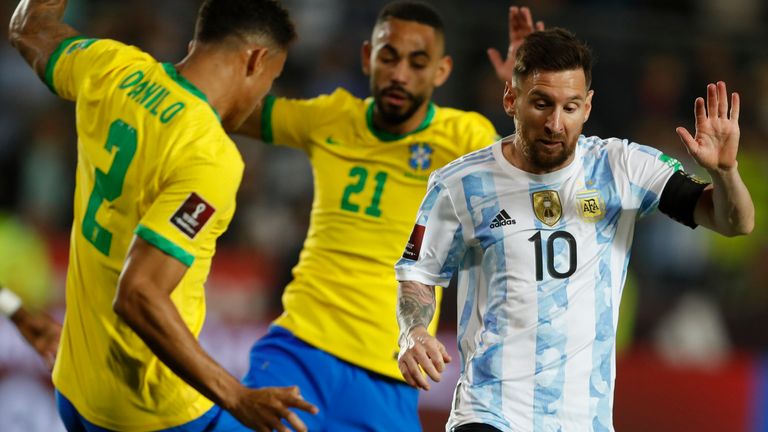 Brazil as a nation don’t lack confidence when it comes to the fortunes of their football team. For this World Cup, those confidence levels are sky-high, and it’s clear to see why.

Tite has got them playing well, Neymar is having a superb season at Paris Saint-Germain and their squad depth is off the charts.

Neymardependência is a term that has been used frequently over the past decade as Brazil have sought a sixth World Cup title.

The dependency on Neymar has been there, and both Jamie Redknapp and Gary Neville have tipped the PSG forward to be the star of the tournament.

But everything is gelling for the Seleção.

Crucially, there is belief in the manager. There have been times in the past when the spotlight has been on the man in charge to get the best out of the country’s most technically gifted players – but there is no such scrutiny this time around.

South American football expert Tim Vickery tells Sky Sports: “What we’ve seen during the qualifying campaign is the benefit of a complete cycle.

“Going into the last World Cup, he’d had less than two years. He’s now had the complete cycle heading into this World Cup and it’s just given him much more time to work.

“Everything that Tite has tried has worked. It’s all changed since they lost the final of Copa America last year to Argentina. Since then, they’ve gone 15 games unbeaten – 12 wins and three draws – 38 scored, five conceded.

“The only problem during the build-up to the World Cup is that everything has gone too well.”

Tite has always brought a club-management style to his coaching, and his selections have been vindicated so far. There is a lot of positivity surrounding the Brazil camp. What could possibly go wrong…

Such are Brazil’s wealth of options, you really do have to nit-pick to find areas of possible weakness. One or two question marks over the make-up of the defence remain. Gabriel Magalhaes has performed well for Arsenal but was left out of the World Cup squad.

Vickery adds: “With Magalhaes, I don’t understand it as he was in the squad consistently for almost a year and didn’t get a game. He’s the only left-footed center-back that they’ve got.

“In the friendlies against Ghana and Tunisia in September, you thought that would be the time they’d look at him, but they dropped him entirely and brought in Gleison Bremer of Juventus and Roger Ibanez of Roma.

“I’ve absolutely no idea why, but Tite was obviously not convinced by him. Something has happened there, and I don’t know what it is. Bremer has been selected and Gabriel has been squeezed out. It’s a big surprise.”

The other three centre-back options are more or less settled with Eder Militao, Thiago Silva and Marquinhos battling it out for a regular start.

Vickery says: “The full-backs have totally different roles now for Brazil from what you’d expect. They’re not auxiliary wingers. Now that they’ve got wingers, they don’t need a Roberto Carlos or a Cafu going up and down the flanks all the time.

“The model Tite’s looking for full-backs is much more like we see at Man City rather than at Liverpool. Their role is less flashy but the right-back will tuck in as an extra midfielder to cover that defensive space.

“The left-back will have a little bit more license to in Alex Sandro, to cut into the attacking line with an element of surprise but again, what they’re looking for from the full-backs is something much less glamorous than you might expect from Brazil full-backs.

“Danilo and Alex Sandro aren’t world-class players but they’re not expected to do world-class things.”

“I think Danilo is going to be first-choice right-back. But Militao can also play in that area, not only at center-back. It’s a thought that is flickering in Tite’s mind. That’s a way of getting yet another attacking player into his squad.”