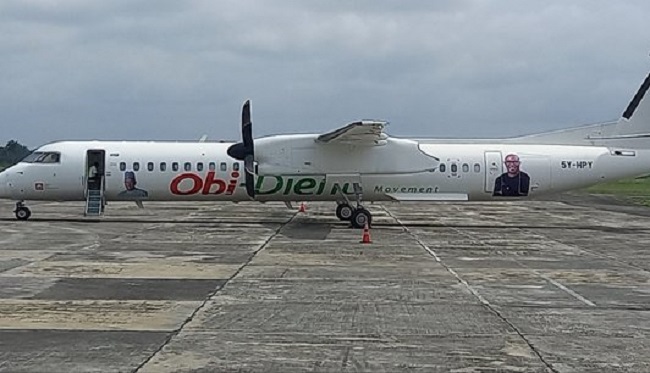 The Obi-Datti Media Office has condemned the grounding of its campaign aircraft by the Nigerian Civil Aviation Authority (NCAA), the situation it said almost disrupted its scheduled campaign rally in Ibadan.

In a statement by Diran Onifade, Head of Media Obi-Datti Campaign Organisation said the party expressed dismay at the grounding of its campaign aircraft.

It added that the action led to the inability of Labour Party (LP) and campaign officials, who had already gathered at Lagos and Abuja Airports, to attend the Ibadan rally.

Diran who earlier spoke about the development said it took the party by surprise but that couldn’t stop them from holding the rally as planned.

The Obedient plane was grounded today by the powers that be “for regulatory reasons” only.

Please ignore any mischievous rumors. Our massive rally in Ibadan is going on as planned.

“All we know is what the leasing vendor told us to the effect that “Federal authorities won’t allow the Obedient Aircraft to file a flight plan, because of ongoing regulatory investigations.

“We are not privy to the specific details or nature of the investigations.

“Mischievous political operatives had cheaply seized the opportunity to spread the unfounded rumors of an air crash which was promptly dispelled.”

The Ibadan rally was however a huge success with the LP Presidential Candidate,  Mr. Peter Obi making a stop at Iseyin Town before joining a multitude of organic supporters at the Lekan Salami Stadium, Adamasingba, Ibadan.