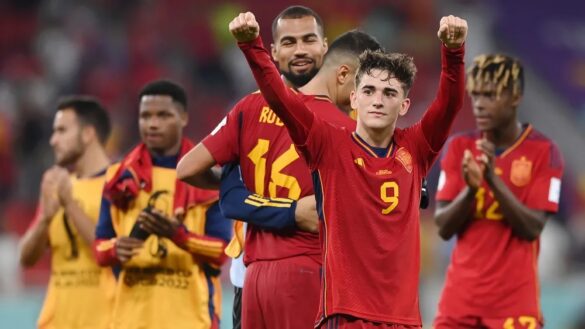 As we near ever closer to the finals in Qatar, Goal takes a look at the biggest wins in the tournament’s history

We’ve seen some incredible results throughout the illustrious history of the World Cup.

Germany’s 7-1 demolition of Brazil at the 2014 edition of the tournament still sits fresh in the mind of fans from across the world, while the 2018 edition also offered up some free-scoring matches.

Russia saw off Saudi Arabia 5-0 in the opening game, England hammered Panama 6-1 and Belgium recorded a 5-2 win over Tunisia.

Neither of those matches is among the top 10 biggest wins of the competition, though.

In fact, even Brazil’s dramatic loss doesn’t make the cut!

Let’s take a look at the matches that do make up the top of biggest World Cup wins ever!

Spain started their 2022 World Cup campaign with a thumping 7-0 victory against Costa Rica.

Dani Olmo opened the scoring in the 11th minute which opened the floodgates. Marco Asensio, Gavi, Carlos Soler, and Alvaro Morata got one each while Ferran Torres bagged a brace.

Gavi’s strike was a thing of beauty which also made him the youngest goalscorer for Spain at the World Cup.

The 2010 World Cup clash between Portugal and North Korea was marked by Cristiano scoring his first international goal in 16 months of asking, and his only one of the competition.

Raul Meireles, Simao, Hugo Almeida, Liedson and Tiago (two) completed the scoring in what was the only fixture in the tournament in which the Portuguese found the back of the net.

Poland racked up three wins from three games in the Group Stage of the 1974 World Cup on their way to their third-place finish, with their 7-0 thrashing of Haiti the most imposing.

A hat-trick from Andrzej Szarmach was added to by Grzegorz Lato (two), Jerzy Gorgon, and Kazimierz Deyna.

The 1954 World Cup was proved a great source of goals, with Turkey’s 7-0 drubbing of South Korea just one of a handful of games to end with a six-goal-plus margin.

In fact, in Group Two alone, 32 goals were scored across just four games between Turkey, Korea, West Germany and the great Hungary side of the time.

The 1954 World Cup saw Scotland participate for the first time, though only 13 of their players travelled to the tournament in Switzerland.

After being beated 1-0 by Austria in their first outing, Scotland were hit by a Carlos Borges hat-trick, while Oscar Miguez and Julio Abbadie each scored twice as Uruguay picked their opponents apart.

The 2002 World Cup opened with an emphatic 8-0 thrashing of Saudi Arabia for Rudi Voeller’s Germany.

The victory was inspired by a Miroslav Klose hat-trick, with Michael Ballack, Carsten Jancker, Thomas Linke, Oliver Bierhoff and Bernd Schneider also on the scoresheet.

Uruguay played just one Group game during the 1950 finals after the France national team withdrew from the tournament.

Oscar Míguez scored three goals as Uruguay progressed into the next round before eventually beating Brazil in the final showdown to claim the trophy, with Miguez ending the competition as the second-highest scorer behind Ademir.

The 1938 World Cup saw Sweden paired with Cuba in the quarter-final stage of the tournament, a game which ended in humiliation for the latter.

Harry Andersson and Gustav Wetterstrom each scored a hat-trick, with Tore Keller and Arne Nyberg also getting on the scoresheet.

Zaire were the only African team at the 1974 World Cup and competed in the finals amid a backdrop of controversy and dictatorship back at home.

Their hopes of glory soon fell apart, however, first losing to Scotland and then falling to a 9-0 thrashing at the hands of Yugoslavia in the Group Stage.

The Golden Team of Hungary topped Group Two at the 1954 World Cup, thanks partly to their 9-0 victory over South Korea in their second outing in Zurich.

Ferenc Puskas scored twice in the meeting between the two as Hungary eventually went into the final against West Germany, falling to a surprise 3-2 loss.

El Salvador’s qualification for the 1982 World Cup was a miracle in itself, with civil war tearing the country apart at the time.

Substitute Laszlo Kiss scored a seven-minute hat-trick to become the only non-starter to have ever done so at a finals and also the fastest to score a treble.

Both Hungary and El Salvador fell out of the competition after the group games, however, as Belgium and Argentina progressed.