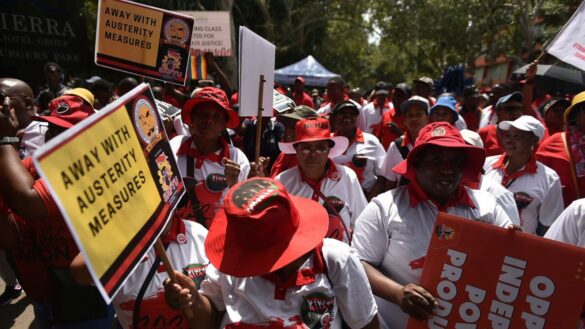 Thousands of South African government workers took part in nationwide demonstrations on Tuesday (Nov 22) to demand a 10% increase in their salaries.

Negotiations between public sector unions and the government are deadlocked. The government is resolved to unilaterally implement a 3% pay hike, which hasn’t satisfied the unions.

In Pretoria workers downed tools and marched to the offices of the national treasury to submit their demands.

Employment minister Thulas Nxesi, a former trade unionist, was booed by workers as he arrived to receive the memorandum of demands.

“We are here to register our complaints against the government, the sixth administration that does not take workers seriously”, Sandile Dube, a NEHAWU union official said.

“Government workers deserve more than the three percent (3%). We reject the gratuity that does not add value in our pensions. That pension is the only thing that is reserved for our children.”

The government has announced a no-work-no-pay principle for workers who took park in the demonstrations, but this did not deter them from staging demonstrations across the country’s major cities.

This was a second round of demonstrations after the Public Service Association, which represents over 200,000 public servants, initially declared a dispute with the government.

The wage dispute has now escalated, with up to 800,000 workers rejecting the government’s pay increase.

“We are here because we don’t want this three percent (3%). We cannot afford petrol, we cannot afford electricity. Everything is going up but our increment does not seem to be going up,” Tholakele Zulu, a government employee explained.

The volatile situation in the southern African nation’s public service is among many challenges faced by the government, including an unemployment rate of over 30%. This record was heavily criticized by the leader of the South African Communist Party.

“The government that listens only to the bourgeoisie and condemns workers does not deserve to be re-elected into office”, Solly Mapaila told protestors.

“And therefore, how they respond to these public sector demands and workers’ rights and the entire demands of the working class is the basis upon which they can lead us. But at the moment they don’t deserve to lead us.”

Seven unions in the public service face an uphill battle as they press on with their national day of action which will be the country’s third national one-day strike by organized Labour this year alone.

Mike Shingange, deputy president of the Congress of South African Trade Unions, said the unions would continue mobilizing more workers to join nationwide pickets to force the government back to the negotiation table.