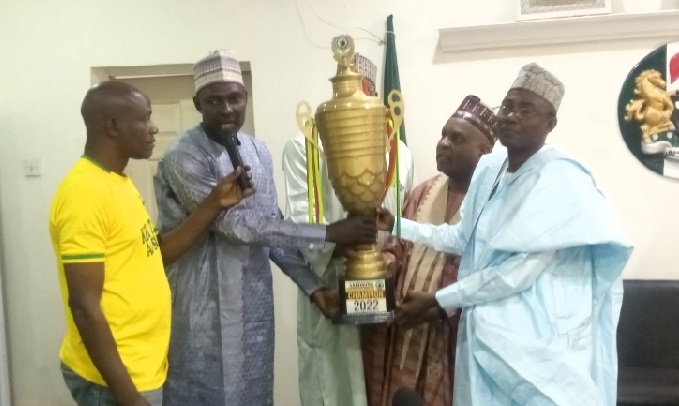 The Team presented the trophy to Kebbi State Governor, Senator Abubakar Atiku Bagudu CON in a colorful ceremony held at the Conference Hall of Cabinet Office, Birnin Kebbi on Tuesday.

Governor Bagudu applauded the team for its excellent performance at the tournament and for winning the trophy.

He said that it has become the policy of this administration to acknowledge any achievement made for the state, and pledged the state government’s continuous support to the promotion and upliftment of sports in the state, particularly the game of football which he described as a lucrative venture in the world.

The Governor, who was represented by the Secretary to the State Government, SSG, Babale Umar Yauri urged the youth in the state to engage fully in the game of football.

Earlier, before the presentation of the trophy to the governor, the State Chairman of NFF, Alhaji Abubakar Chika Ladan who is also the Commissioner for Works and Transport explained that the competition which was in its second phase, started last year with Kebbi all-stars emerging as victorious by beating the host state, Nasarawa in the finals of this year.

Ladan thanked the governor for his financial support to the Stars Football team without which the team could not have been able to achieve the feat.

He acknowledged that since the advent of the present administration, Governor Bagudu had revived and rekindled sports that led to the formation of the Kebbi united football club to represent the State at the professional football and international levels.

According to him, the governor gave approval for the establishment of a football Academy to train and discover budding talents as future footballers

He announced that the two coaches for the academy from Portugal have arrived, in Abuja and were on their way to Birnin Kebbi to commence work.

The State NFF Chairman, Abubakar Chika Ladan made reference to international players like Zaidu Sanusi, playing for FC Porto, and Suleiman Garba, who was invited to Nigeria’s Olympic team as all indigenes of Kebbi State.

In addition, he said four players from Kebbi State were invited for trials by the sporting Lisbon football club in Portugal.

In a remark, the Chairman of Kebbi All Stars Football Club, Alhaji Nura Abdullahi Koko, expressed gratitude to Kebbi State Government under the leadership of Senator Abubakar Atiku Bagudu, CON, for the moral and financial support to the team.

He also appreciated the support of the SSG and their Patron, Alhaji Yusuf Haruna Rasheed for his unrelenting financial assistance to the team.

Koko said the victory of the team in Nasarawa was surely a victory for the State, attributing their success largely to the unwavering commitment and support of Governor Abubakar Atiku Bagudu to the team.