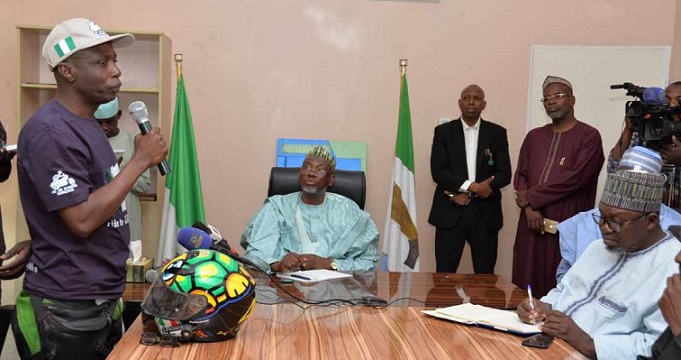 Delivering the relief materials to the Jigawa state government on behalf of the groups, the Chairman Board of Trusty (BOT) and National President of the JeJe Riders, Ibrahim Mathew said the materials are aimed at giving their own support to the flood victim in the state.

The BOT Chairman who was represented by Dr. Muhammed Garba Mainasara also sympathized with victims who lost their loved ones/properties and were displaced by the disaster.

“We are presenting this donation as part of the charity activities we are carrying in collaboration with Natore Chemical Company and other partners.

“JeJe Riders is a group of tourists but we have many charity and community programs for supporting fewer privileges, complementing government efforts in promoting digital literacy, education, public healthcare service delivery, and fight against rape, drug abuse, and related awful act in the society.”

He explained that the food I teams delivered to the Jigawa state government included 200 bags of Maize 120kg and 200 cartons of noodles among others.

“We are planning to do more in Jigawa state including supporting digital literacy with the provision of a computer laboratory for selected schools in the state,” he declared.

Speaking when he received the JeJe rider in Dutse, the state Governor Muhammad Badaru Abubakar thanked the group for the donation and also identified with the people of the state in this abysmal time when flooding killed over 130, displace over 100,000 and wished away over 14,000 hectares of farmland.

The governor who was represented by his deputy Malam Umar Namadi reiterated the commitment of the state government to Join hands with all partners and experts in finding a lasting solution to the perennial disaster.