- Commissions ICT Centre equipped with over 400 computers in Kontagora 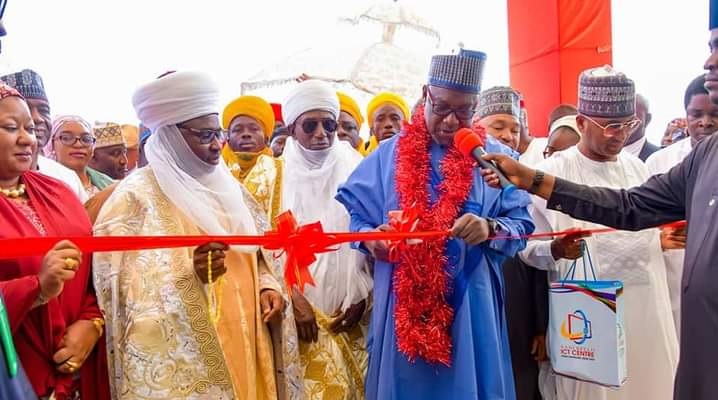 Governor Abubakar Sani Bello of Niger State has called on well-to-do members of the society to support the government in developing the education sector.

A statement by the Chief Press Secretary to the governor, Mary Noel-Berje said Bello made the call recently when he commissioned an Information Communication Technology (ICT) center with over 400 computers, established by Sani Bello Foundation in Kontagora.

According to the statement, the governor observed that the development of the education sector is a long-time investment that requires the collective efforts of government and private individuals.

He said the establishment of the ICT center was aptly adding that the center could be used for the Joint Admission and Matriculation Board Examination (JAMB) Computer Base Test (CBT) thereby reducing the risk of traveling long distances.

“This is a very good development. With this, people within the zone now have the opportunity to write their JAMB exams, they don’t need to travel to Minna.

“This will drastically reduce risk and will also increase the number of students that will write JAMB exams”.

The governor, who enjoined others to emulate Col. Bello, commended his unrelenting and philanthropic gestures through his foundation, to the society especially the people of Kontagora and its environs.

Speaking on why he established the ICT center, Col Sani Bello explained that the idea was born out of the need to compete favorably with other zones of the state and reduce the risk involved in traveling long distances by people within the zone to write Computer Base examinations.

Earlier, the Vice Chairman of Col. Sani Bello Foundation, Dr. Usman Sani Bello in his address disclosed that the ICT center has over 400 computers, solar power, a Live Conferencing Screen, and 350KVA generator amongst others.

In their separate remarks, Sen. Bala Ibn NaAllah of Kebbi South Senatorial District, Niger State Commissioner for Education, Hajiya Hanatu Jibrin Salihu, Emir of Kontagora, Alh. Mohammadu Barau Muazu all commended Col. Sani Bello for the giant stride in serving humanity assuring him that posterity will be kind to him.

A gift was presented to Col. Sani Bello by Commissioner for Water Resources,   Mamman Musa on behalf of the Niger State executive council.

The governor thereafter inspected the facility located at the permanent site of the Sani Bello proposed University, Usubu, Kontagora.

See who won at the American Music Awards