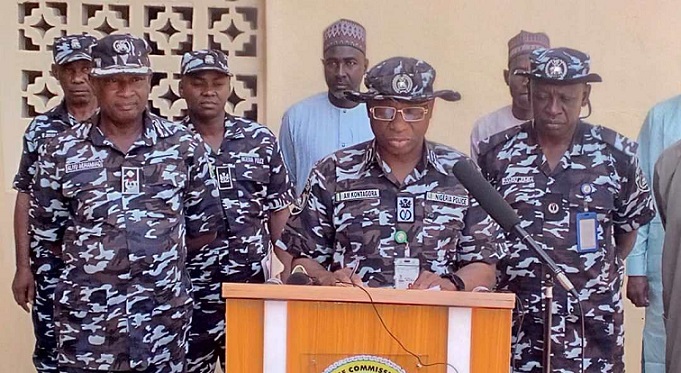 Kebbi State Commissioner of Police  CP. Ahmed Magaji-Kontagora has again appealed to the members of the public to see fighting crimes as a collective responsibility by assisting the police and other security agencies with prompt information that will aid in reducing crimes to the barest minimum in the state

He made the appeal at the police Command headquarters While parading suspected criminals with various offenses before newsmen in Birnin Kebbi.

The CP said one Bashiru Sani of Helende village in Argungu Local Government Area of the state was arrested for being in possession of  N316,000 counterfeit naira notes; the money was in N 1,000 denomination.

“In the course of the investigation, the principal suspect, one Samaila Umar (25)yrs of Argungu Local Government Area, who printed the counterfeit currency via computer desktop was also arrested,” he said.

The two he said would be prosecuted accordingly.

However, he added that police also arrested one Ahmed Ibrahim of Kasuwar Gari area of Sakaba Local Government Area for being in possession of criminal charm and rape.

He said the suspect deceitfully took a 14-year-old girl to one Naziru Muhammad (52), where he criminally charmed the girl and had carnal knowledge of her almost seven times.

Magaji-Kontagora said the girl got pregnant, the case would be charged to court accordingly.

Also on the 11th October 2022, at about 1400hrs, one Muntari Abubakar ‘m’ of Jega LGA, Kebbi State, reported that, on the 7th August 2022, while on transit from Lagos to the northern part of the country, unknown persons numbering about ten, attacked him between Bega to Tollgate and collected the sum of Ten Thousand Naira (N 10,000) cash and one cell phone Tecno handset.

Later, he was rescued by a team of policemen on patrol. Subsequently, on the 15th of August 2022, while at home, he went to Union Bank, Jega, to withdraw some money, but he discovered that the sum of Nine million seven Hundred Thousand Naira (N 9,700,00) had been withdrawn from his Bank account and transferred into different Bank accounts.

On receipt of the report, a team of Detectives swung into action and succeeded in arresting one Abu Oladeji Babatunde ‘m’ aged 30yrs, at Ogun State. In the course of the investigation, one Abraham Osi Richard ‘m’ aged 35yrs, and Ibrahim Yaya ‘m’ aged 30yrs, were also arrested in connection with the case at Logos State. Investigation into the case is in progress and the suspects will be charged in court accordingly.

However,  the Commissioner of police has advised all the political actors in the State with reference to the forthcoming 2023 general elections to subsume their campaigns within the extant legal frameworks, avoid actions or speeches that could inflame the political order, and cooperate with the police in their drive to guarantee a peaceful electioneering period.