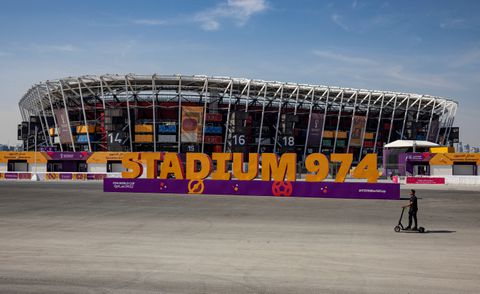 Alcoholic beer will not be sold at Qatar’s World Cup stadiums, world soccer governing body FIFA said on Friday, a last minute reversal which raised questions among some supporters about the host country’s ability to deliver on promises to fans.

The announcement comes two days before Sunday’s kickoff of the World Cup, the first to be held in a conservative Muslim country with strict controls on alcohol, the consumption of which is banned in public.

“Following discussions between host country authorities and FIFA, a decision has been made to focus the sale of alcoholic beverages on the FIFA Fan Festival, other fan destinations and licensed venues, removing sales points of beer from Qatar’s FIFA World Cup 2022 stadium perimeters,” a FIFA spokesperson said in a statement.

For years, Qatar’s tournament organizers have said that alcohol would be widely accessible to fans at the tournament.

“Some fans like a beer at the match, and some don’t, but the real issue is the last-minute U-turn which speaks to a wider problem — the total lack of communication and clarity from the organizing committee towards supporters,” the association said in a statement on Twitter.

Qatar, the smallest country to host a World Cup, is bracing for the expected arrival of 1.2 million fans during the month long tournament, more than a third of the Gulf Arab state’s 3 million population.

Budweiser, a major World Cup sponsor, owned by beer maker AB InBev, was to exclusively sell alcoholic beer within the ticketed perimeter surrounding each of the eight stadiums three hours beforeand one hour after each game.

“Some of the planned stadium activations cannot move forward due to circumstances beyond our control,” AB InBev said in a statement.

Someone at the company had summed the situation up in a pithier fashion. “Well, this is awkward…” read a post on Budweiser’s official Twitter account. The comment, subsequently deleted, was broadcast as a screengrab by the BBC.

Budweiser has been a World Cup sponsor since 1985, the year before the event was held in Mexico. For 2022, it has launched its biggest ever campaign, with activities for Budweiser and other brands in more than 70 markets and at 1.2 million bars, restaurants and retail outlets.

The World Cup typically boosts beer consumption and the Belgium-based maker of brands such as Stella Artois and Corona clearly want to profit from the millions of dollars it pays to be a sponsor.

However, it has said those profits will come less from consumption at the event’s location but from fans watching on television.

“Tournament organisers appreciate AB InBev’s understanding and continuous support to our joint commitment to cater for everyone during the FIFA World Cup,” the statement said.

The stadium reversal comes after long-term negotiations between FIFA president Gianni Infantino, Budweiser, and executives from Qatar’s Supreme Committee for Delivery and Legacy (SC), which is organizing the World Cup, a source with knowledge of the negotiations told Reuters on condition of anonymity.

The SC did not respond to Reuters’ request for comment and FIFA did not confirm Infantino’s involvement.

“A larger number of fans are attending from across the Middle East and South Asia, where alcohol doesn’t play such a large role in the culture,” the source said.

“The thinking was that, for many fans, the presence of alcohol would not create an enjoyable experience.”

Alcohol will continue to flow freely inside stadium VIP suites, which FIFA’s website advertises as offering a selection of beers, Champagne, sommelier-selected wines, and premium spirits.

Budweiser will sell its non-alcoholic beer throughout the stadium precincts for $8.25 per half-liter, the statement said.

Questions have swirled around the role alcohol would play at this year’s World Cup since Qatar won hosting rights in 2010. While not a “dry” state like neighboring Saudi Arabia, consuming alcohol in public places is illegal in Qatar.

Visitors cannot bring alcohol into Qatar, even from the airport’s duty free section, and most cannot buy alcohol at the country’s only liquor store. Alcohol is sold in bars at some hotels, where beer costs around $15 per half-liter.

Budweiser will still sell alcoholic beer at the main FIFA Fan Fest in central Doha, the source said, where it is offered for about $14 per half-liter. Alcohol will also be sold in some other fan zones whereas others are alcohol-free.

“Fans can decide where they want to go without feeling uncomfortable. At stadiums, this was previously not the case,” the source said.