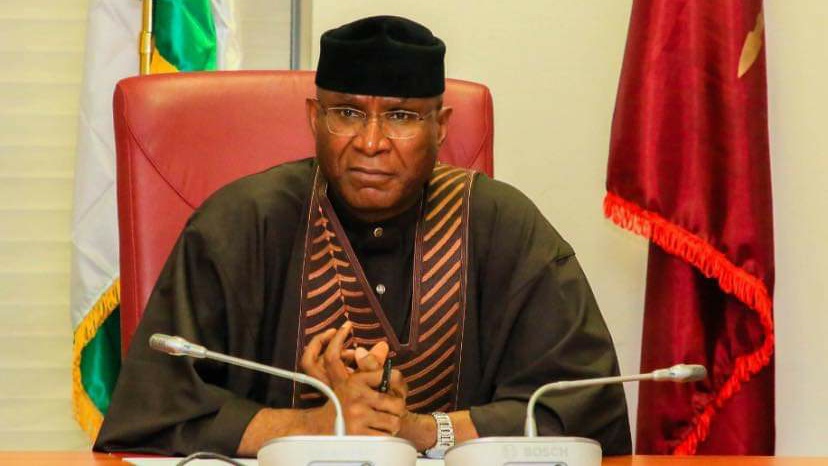 Deputy Senate President and sole All Progressives Congress (APC) aspirant for the governorship of Delta State, Ovie Omo-Agege, Wednesday, released his manifesto detailing how he would rebuild the state if elected governor in 2003.

In a statement, Mr. Omo-Agege described the 60-page manifesto as “The EDGE to Build a New Delta (BAND), which according to him, covers critical areas of governance that would drive his government’s agenda.

The primary election of the APC was conducted on Thursday.

Mr. Omo-Agege is from the Delta Central Senatorial District, which is favored to produce the next governor of the state in line with the unwritten zoning arrangement in the state.

The deputy senate president said, “EDGE encapsulates Employment and Empowerment, Good Governance, Development, and Enduring Peace and Security. It is a product of profound thought based on my practical experience both in the Executive and Legislative arms of government. Having served as Secretary to the Delta state government, as a senator, and now as Deputy Senate President, I am privileged to have a panoramic view of the issues of governance.”

He pointed out that “It is these experiences I am bringing to bear on my plans for Delta state. Yes, governance is tough, but it is not all rocket science. So we are going to engage with vigor on all fronts, and build a brand new Delta.”

Mr. Omo-Agege said he was motivated by a desire to arrest receding hope among Deltans and build a state where the people’s future is brighter than their past.

“I will address our scary unemployment rate by prioritizing public investment in agriculture and tech-driven entrepreneurship. My plan as stated in our manifesto will change the business ecosystem of the state and create an investment-friendly charter that makes access to funds and infrastructure a natural way of life.”

“Human capital development, agriculture, tourism, infrastructure, housing, and other labor-intensive interventions are at the core of our agenda. We shall establish a Delta State Employment, Entrepreneurship, and Empowerment Programme (DEEP), and facilitate the establishment of cluster industries in each of the 25 LGAs of our state.

“We will deliberately create an enabling environment for industries and manufacturing. Establish technology hubs, set up small business loan guarantee schemes, promote skills acquisition, and set up a Career Development Centre for Deltans.

“As part of our plans to promote ease of doing business, we’ll undertake institutional and process reviews, remove red tape and bureaucratic bottlenecks, improve infrastructure, and re-engineer our peace and security strategies while establishing a one-stop repository of business knowledge and information,” he said.

Mr. Omo-Agege said his administration would guarantee the rights of women and invest their unique energy to drive social and economic development in the state.

He said he would also initiate a youth development program that moves them away from the hopelessness of today, connect them to creative endeavors, and generate energy for honorable work.

He said while making aggressive investments in modern infrastructure capable of opening up the total economic energies of our people, the administration would lift the state out of a mono-economic dependency by launching diversification into tech and business incubation.

“Our agenda is to build a compassionate state that guarantees support for the vulnerable among us, and ensures that our people live in peace and security, free from harassment, intimidation, and militancy,” Mr. Omo-Agege said.