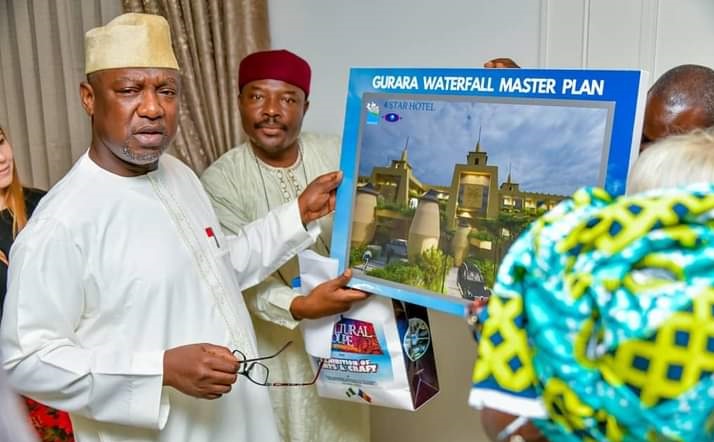 Niger state governor, Abubakar Sani Bello has expressed hope that the development of Gurara waterfalls which would become a world-class Tourism, Agricultural, Educational, and Cultural resort would commence early next year.

The Chief Press Secretary to the governor Mary Noel-Berje in a statement, Friday, said Bello stated this when he was presented with the final master plan of Gurara waterfalls by the lead Consultant, Architects, Elise van Gass Viviers, at the governor’s lodge, Minna.

According to the statement, Governor  Bello commended the efforts of the architects and expressed satisfaction with the work done pointing out that the major attractions of the resort have been captured in the plan.

He disclosed that some investors have indicated interest but will need to go through the Master plan with them to allow them to make input in the plan in line with their investment profile.

“We have received some investors that have indicated interest but we have to go through the Master Plan with the investors just in case they have something to add or take out that will fit their investment profile.

“There is still a long way to go but hopefully the project will start early next year”, he said.

The lead Consultant, Archative Architects Else Van Gass who commended the governor for the vision to develop the waterfalls expressed confidence that the project when completed will be a delight to all.

The statement added that the final master plan arrived after a series of observations and suggestions made by various stakeholders on the draft report one to four that were sent by the consultant beginning in July 2020.