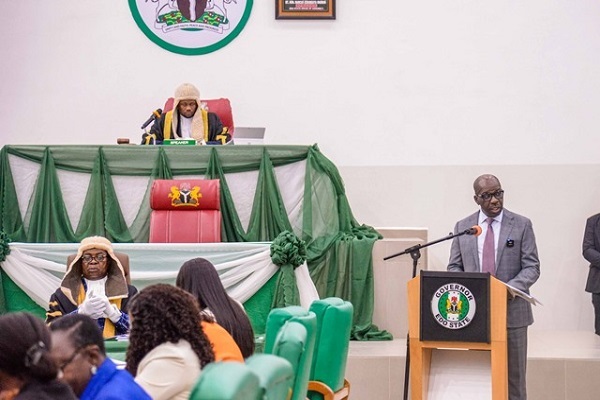 The Edo State Governor, Mr. Godwin Obaseki, on Wednesday presented an appropriation bill of N320.35 billion as a budget estimate for the 2023 fiscal year, to the State House of Assembly, christened ‘Budget of Resilience and Transformation’.

The governor made the presentation on the floor of the Edo State House of Assembly and was accompanied by his Deputy, Rt. Hon. Comrade Philip Shaibu, Secretary to the State Government, Osarodion Ogie Esq., Head of Service, Anthony Okungbowa Esq., Chief of Staff, Hon. Osaigbovo Iyoha, Commissioner for Communication and Orientation, Chris Osa Nehikhare, amongst other appointees and some traditional and religious leaders.

While presenting the details of the proposed budget, Obaseki noted that the budget was designed to consolidate the gains made in the outgoing fiscal year, with renewed vigor to transform the state through public-private partnerships in key sectors of the economy of the State.

He emphasized that despite the economic downtowns in the outgoing year, his administration was able to make appreciable gains in key sectors of the economy.

The governor said: “Mr. Speaker and Honorable members, our budget size for the 2023 fiscal year is N320.35bn.

“This year, the budget is made up of N192 billion for Capital and N127.5 billion for Recurrent expenditure, while the budgetary figures may look high, on an adjusted inflation basis, it is only slightly higher than that of 2022.

“The revenue estimates for the budget are based on a $70 per barrel benchmark for crude oil and average daily production of 1.69m barrels per day as well as an increase in Internally Generated Revenue (IGR) to N60.4bn, owing to reforms in tax collection and land management activities.

“We intend to push for reforms and revenue in the built environment.

“We are committed to boosting capital spending this year. To this end, we expect a capital/recurrent expenditure ratio of 60% to 40% respectively.

“This would reinvigorate the economy, providing the right impetus for the needed growth expected in the year.

“The balance will be sourced from development financing and financial institutions.”

He explained that the 2023 budget estimate will be streamlined across the following areas; developing human capital and preparing the young population for a new world of work, deepening the public and civil service transformation so that government can support its rapid transformation activities, Economic growth by creating the enabling environment to support businesses, particularly SMEs.

Obaseki added that emphasis will be placed on Education, Health, Infrastructure, Technology, and Youth Enterprise as well as human resource development, security and safety, and economic development.

While reeling out some of the achievements made in the outgoing year, despite national and global economic constraints, the Governor thanked the members of the State House of Assembly and the Edo people for their unwavering support and solid alliance in delivering on their mandate.

In his remark, the Speaker of Edo State House of Assembly, Rt. Hon. Marcus Onobun said: “We applaud your visionary initiative, leadership, passion and strategic innovation, and dedication to our dear State and its people.

“We as a house align ourselves with your visionary leadership.

“Consequently, as a symbol of our harmonious relationship with you and the commitment to Edo State People, we have passed over forty laws, and other numerous resolutions geared towards the rapid development and transformation of our dear State.

“This is the primary goal of our constitutionally assigned mandate which is making laws for the good and betterment of the people.

“We assure you that this budget proposal will receive timely consideration and we will collaborate with the relevant stakeholders, Ministries Departments, and Agencies of government to deliver an exemplary budget.”

The House thereafter moved a motion for the first reading of the proposed Budget and adjourned seating till Monday 28th November 2022.