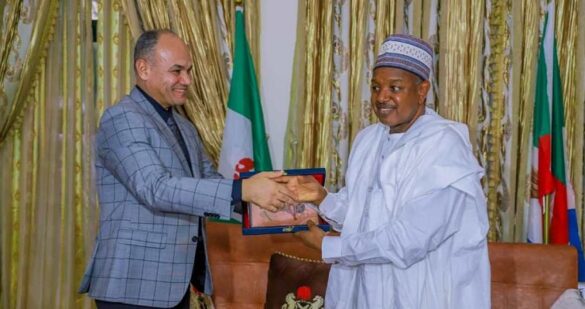 A team of international investors from Egypt on an investment visit led by Gen. Walid Yehia Soliman Morsy has visited Kebbi State to explore areas of partnership in agriculture.

The Egyptian delegation paid a courtesy visit to Kebbi State Governor at the Government House, Birnin Kebbi on Wednesday.

In his remarks, Governor Atiku Bagudu told the investors that President Muhammadu Buhari had worked so hard in the last seven years to provide an investor-friendly environment.

He said: “Nigeria has also in the period under review operated a program, called, ‘Ease of doing business.

“This is to ensure that all the regulatory and contracts frameworks were made easier and efficient for investors.”

“For instance, one of the largest rice mills in Nigeria, WACOT, domiciled in Kebbi State took only eleven months from land identification to commissioning.”

He, therefore, said the proposed partnership between Egypt and the Nigerian investors was apt and timely.

According to the governor, the move was not misplaced as the two countries had an age-long mutually beneficial relationship which will only be bolstered now.

“We will produce together, add value together and market together. We have commonalities together.

“Nigeria with over 200 million population provides a hub for investments and marketing, so also Egypt’s vast potential and being a gateway to Middle Eastern markets.

“More is being done to make the investments environment friendlier in Kebbi and Nigeria in general,” Bagudu averred.

Bagudu further said over the years, his administration has provided a conducive environment for investors to establish economic ventures in the state.

The State, he explained in recent years, has served as a rice hub where rice farmers within Nigeria and beyond have been visiting to emulate the agricultural successes of Kebbi State.

Bagudu pledged to collaborate and support the Egyptian delegation for a stronger partnership in agriculture.

He thanked the delegation for choosing Kebbi State for their visit.

Speaking earlier, the leader of the Egyptian delegation Gen. Walid Yohia Soliman Morsi acknowledged the hospitality of the people of the state, adding that the two countries will mutually benefit from the partnership.

He said his country has the potential to engage in the production and marketing of rice.

President of RIFAN, Alhaji Aminu Goronyo said that Nigeria was moving towards self-sufficiency since 2021, taking over from Egypt, the erstwhile number one rice producer in Africa.

Goronyo added that Kebbi was the birthplace of the rice revolution in Nigeria sequel to the flag-off of the Anchor Borrower’s Programme by Buhari in 2015.

He also noted that sequel to the uncommon commitment of Bagudu, Kebbi was playing a key role in ensuring sustainable general food security in the country.

Speaking earlier, the CEO/MD of EGTA Investments, Bashir Yusuf Ibrahim who introduced the Egyptian delegation to the Kebbi State Governor described Kebbi as the home of Nigeria’s agriculture.

He said that the visit would afford the members of the delegation to see the colossal potential for investments in agriculture.

Ibrahim said that Egypt was looking towards Nigeria and Kebbi particularly to be self-sufficient in rice production, he added.