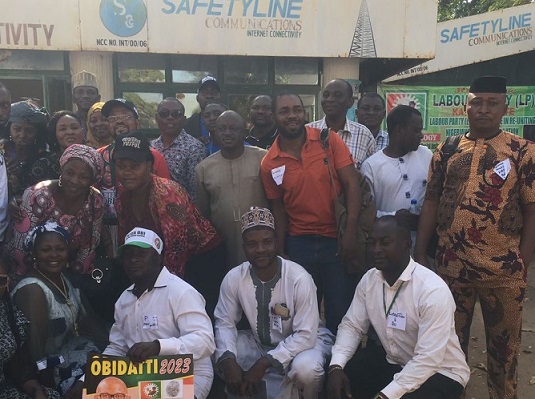 All Kaduna State Labour Party Citizens-based Support Groups have strengthened their structures by electing their Executive Committee Members across the 3 Senatorial Zones in the State.

A statement on Thursday by the spokesperson of the group, Paul Onwude said the election took place at the premises of the Labour Party Secretariat at Nagwamatse House in Kaduna.

The election was conducted by the officials of the Labour Party Presidential Campaign Council Intervention Team led by Mr. Yusuf Solomon Danbaki, who is the Coordinator of the Team. He was assisted by Mr. Nuhu Bahago, who represented the Gubernatorial Candidate of the Labour Party in Kaduna State; Rt. Hon. Jonathan Asake.

The Election was an open ballot, where the support group Leaders elected their Exco for the purpose of smooth planning, organizing, coordinating, and managing the campaigns and structures going forward.

The General Secretary is Hajiya Rukayya Salihu, and assisted by Markus Musa.

While Madam Maryann Daniels was elected Auditor General 1, Auditor General 2 is Solomon Gandu. The elected Contact and Mobilisation Officer 1 is Aliyu Mohammed Lawal and Contact and Mobilisation Officer 2 is Arc. Julius Uwua. The Director of Strategic Planning 1 elected is  Mr. Francis Peter of the Civil Society Action Group and he is assisted by Mr. Ali Anthony as Director of Strategic Planning 2.

The Executive Committee Members-elect was immediately sworn in by Barrister Deborah Arastus Esq.