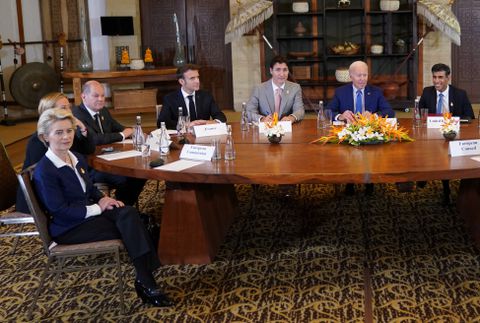 Leaders of the Group of 20 (G20) economies met for a second day of summit talks on Wednesday, although their schedule was disrupted by an emergency meeting to discuss reports of a missile landing in Polish territory near Ukraine.

U.S. President Joe Biden said after the meeting on the Indonesian island of Bali that the United States and its NATO allies were investigating the blast but early information suggested it may not have been caused by a missile fired from Russia.

NATO member Poland had said a rocket killed two people on Tuesday in eastern Poland near Ukraine, and it summoned Russia’s ambassador for an explanation after Russia denied it was responsible.

Leaders from the Group of Seven nations, Spain, the Netherlands and the EU, who were all in Bali for the G20 summit, attended the meeting.

After the meeting, the G20 leaders, dressed in white shirts and some with baseball caps with the G20 logo, took part in a ceremony to plant mangrove saplings to signal the battle against climate change.

She had said before the meeting she hoped to get new insight into China’s policy plans and work toward more economic engagement between the two countries.

WTO Director-General Ngozi Okonjo-Iweala told Reuters on the summit sidelines that several major economies faced a real risk of sliding into recession as the war in Ukraine, rising food and fuel costs, and soaring inflation cloud the global outlook.

Biden held a bilateral meeting with British Prime Minister Rishi Sunak, their first face-to-face talks since Sunak took the job. Biden described Britain as America’s “closest ally and closest friend” while Sunak said the partnership between their countries was unique and their values and interest were aligned.

A Western-led push to condemn Russia’s invasion of Ukraine dominated Tuesday’s talks. Many participants said President Vladimir Putin’s Feb. 24 invasion of Ukraine had pummeled the global economy and revived Cold War-era geopolitical divisions just as the world was emerging from the worst of the COVID-19 pandemic.

As at other recent international forums, the United States and its allies were seeking a statement from the G20 summit against Russia’s military actions.

But Russia, whose forces pounded cities and energy facilities across Ukraine even as the G20 met, said “politicization” of the summit was unfair.

“Yes, there is a war going on in Ukraine, a hybrid war that the West has unleashed and been preparing for years,” said Foreign Minister Sergei Lavrov, repeating Putin’s line that military alliance NATO’s expansion had threatened Russia. Lavrov was representing Putin at the summit but left on Tuesday evening. Russia will now be represented by Finance Minister Anton Siluanov.

A joint G20 communique, which would need to be agreed by all parties, appears unlikely this year, with Indonesia instead pushing for a leaders’ declaration, diplomatic sources say.

A 16-page draft declaration seen by Reuters, which diplomats said was yet to be adopted by leaders, acknowledged the rift over the Ukraine war.

“Most members strongly condemned the war in Ukraine and stressed it is causing immense human suffering and exacerbating existing fragilities in the global economy,” it said.

“There were other views and different assessments of the situation and sanctions.”

The draft also said “the use or threat of use of nuclear weapons is inadmissible”.

The West has accused Russia of making irresponsible statements on the possible use of nuclear weapons since its invasion of Ukraine. Russia has in turn accused the West of “provocative” nuclear rhetoric.

The 19 countries in the G20 together with the European Union account for more than 80% of the world’s gross domestic product, 75% of international trade and 60% of its population.

Host Indonesia has pleaded for unity and a focus on problems like inflation, hunger and high energy prices, all exacerbated by the war.

The draft summit document also said G20 central banks would calibrate monetary tightening with an eye on the global inflation problem, while fiscal stimulus should be “temporary and targeted” to help the vulnerable while not hiking prices.

On debt, it voiced concern about the “deteriorating” situation of some middle-income countries and stressed the importance of all creditors sharing a fair burden.

Some civil society groups blasted the G20 draft declaration for failing to take action on hunger, not strengthening efforts to fund development, and losing sight of an earlier commitment to provide $100 billion in climate financing by 2023.