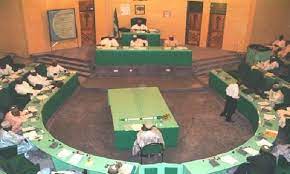 Kano State House of Assembly has passed the bill for the establishment of Muhammad Abdullahi Wase Teaching Hospital after careful deliberations in the Committee of the whole House.

The House passed the bill on Tuesday in a plenary session presided over by the Speaker, Rt. Hon. Engineer Hamisu Ibrahim Chidari pointed out that the bill has undergone careful scrutiny in the House

After consideration in the Committee of the whole the Clerk and Head of Legislative Service, Alhaji Garba Bako Gezawa gave the third reading where the House subsequently passed the bill

Similarly, in today’s session, the House adopted both the recommendation and the report of the House Committee on Higher Education, on a bill to provide  Sa’adatu Rimi  University of Education 2022.

In another development, the House has received a matter of urgent public interest presented to the House by a Member representing Takai Constituency, Hon Musa Ali Kachako calling on the House to call on the State government to assist the victims of a fire incident in Takai Local Government Area,

The House then Prayed to Allah to prevent future occurrences in the State.