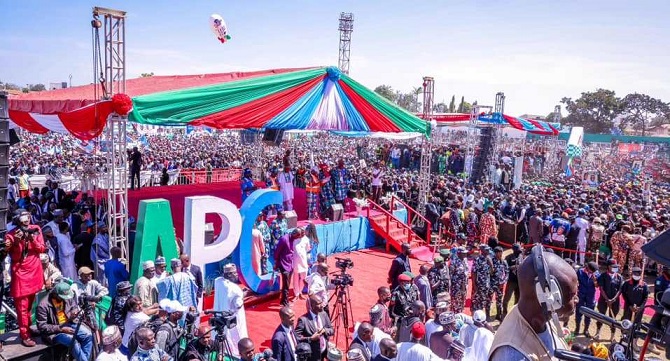 The APC has flagged off its Presidential Campaign in Jos Plateau State with the confidence of winning the 2023 general elections and retaining power.

The spokesperson to Governor Lalong of Plateau state, Dr. Makut Simon Macham in a statement on Tuesday said President Muhammadu Buhari who flagged off the campaign at the Rwang Pam Township Stadium Jos said the APC has all it takes to win the elections because of its performance and level of acceptance in the country.

According to the statement, Buhari said the emergence of Asiwaju Bola Ahmed Tinubu as the Presidential Candidate in a free and fair contest shows that he is an acceptable candidate for the party and Nigerians.

He, therefore, wants the party members to work hard and ensure that there is victory at all levels.

National Chairman of the APC, Senator Abdullahi Adamu said the APC has no fear of any political party as it has done well under President Muhammadu Buhari who has turned around the fortunes of the nation in various sectors.

He said Asiwaju will build on the achievements of President Muhammadu Buhari and ensure that Nigerians are provided with the best opportunities to thrive.

The statement quoted Asiwaju Bola Tinubu saying serving Nigeria is what he has always done and when elected, he will do more to build the economy, provide jobs, power, security, agricultural production, and processing as well as the industrial revolution.

He challenged Nigerians to look carefully before they give their votes saying that some politicians have been making promises without any evidence of performance and experience to show.

He thanked Governor Lalong for leading the campaign as Director General and also hosting the flag-off which he described as successful.

In his remarks, Director General of the APC Presidential Campaign Council and Governor of Plateau State Simon Bako Lalong said: “You will recall that Plateau State in the past hosted such high-level party events which eventually produced Presidents of Nigeria and other national leaders that played significant roles in the growth and sustenance of our democracy.

“On this occasion, we are at the threshold of making yet another history of producing another President in Asiwaju Bola Ahmed Tinubu who will succeed our beloved President Muhammadu Buhari in 2023 by the grace of God.”

“The flag-off ceremony heralds the nationwide campaigns that will see the party traversing the nooks and crannies of Nigeria to mobilize, galvanize and propagate the Renewed Hope Agenda that Asiwaju Bola Ahmed Tinubu and his running mate Kashim Shettima are bringing to Nigerians.

“Already, there is great excitement and expectation over the prospects of an Asiwaju Government which promises to serve the people and carry them along just as Mr. President has done over the years.”

Lalong while assuring that the APC will sweep the elections in Plateau State and across Nigeria explained that from the strategic engagements and Town Hall meetings held recently with various special interest groups, Asiwaju Bola Ahmed Tinubu is the candidate of choice for Nigerians because of his vast experience in tacking problems, ability to listen and gather the best brains to get the job done without ethnic, religious or other sentiments.

His records in Lagos State speak for themselves and his ability to network and carry along Nigerians of different backgrounds is unequaled.

They anchored their confidence on what they called the capacity of Asiwaju and the excellent performance of President Muhammadu Buhari.

APC Gubernatorial candidate in Plateau State Nentawe Yilwatda said hosting the flag-off in Plateau as well as the appointment of Governor Lalong as Director General has affirmed that the State is the home of APC.

He said the State will vote massively for Asiwaju and all candidates of the party because APC has brought a lot of democratic dividends to Plateau State.