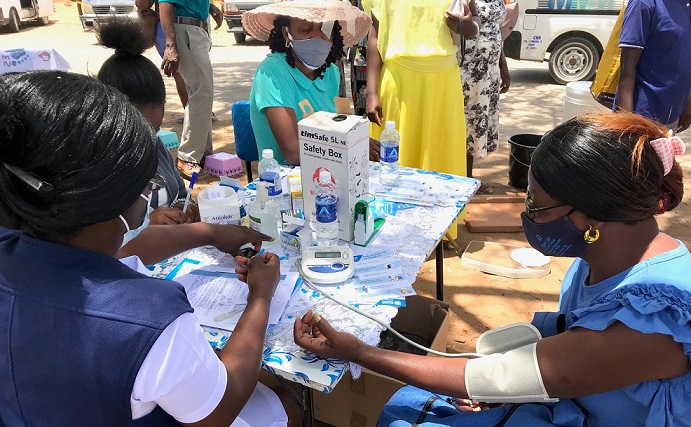 The Federal Medical Centre (FMC) Lokoja, on Monday, sensitized the public on the discovery, prevention, and management of diabetes as part of activities to celebrate the ”2022 World Diabetes Day.”

The News Agency of Nigeria (NAN) reports that Medical Consultants at the hospitals sensitized the staff, patients, and the general public on various topics under this year’s theme: ”Diabetes Education To Protect Tomorrow.”

The Medical Director of the hospital, Dr. Olatunde Alabi, said the essence of the sensitization was for participants to protect their tomorrow as far as their health was concerned with diabetes.

He maintained that diabetes could be well managed if detected early, and such patients would live a normal life, stressing that ”diabetes is not a death sentence.”

Dr. Adewole Adesanya, the Coordinator of the Diabetes Association of Nigeria, Kogi chapter, said the day was to create awareness of diabetic conditions as education was key to reducing it.

Adesanya, who is a Consultant Physician and Endocrinologist, said, ”more than 500 million people worldwide are living with diabetes, and in about 20 years’ time it would have been increased to 700 million”.

He added that One in nine people would have diabetes by 2030 according to the International Diabetic Federation (IDF).

The doctor said the care for diabetes was very expensive, stressing the need for government to subsidize it.

Adesanya appealed to the government at all levels to ensure that their citizens have access to the necessary drugs and care for the treatment of diabetes.

The consultant urged the people to engage in moderate-intensity aerobic activities; anything that gets the heart beating faster courts for at least 150 minutes a week.

Dr. Godwin Tijani, a Consultant Obstetrician, and Gynaecologist, who spoke on ”Diabetes and Women Health”, advised diabetic women to see a doctor before they get pregnant to avoid complications.

According to Tijani, if the woman gets pregnant without a doctor’s certification, it can affect the woman and the baby such as abortion, congenital malfunction, being overweight, etc.

On his part, Dr. Ayodele Ogunmola, a Urologist, who spoke on ”Diabetes and Men Health”, said diabetes if not properly managed can lead to various cancers, especially prostate cancer.

He explained that prostrate remained the most common cancer and the second commonest cause of cancer death among men, saying the sensitization was a way of reducing the boarding on people.

According to him, any man who has lower urinary tract symptoms, such as frequent urination, voiding or obstructive urine, or post-urination dribbling, should see a urologist.

He stressed the need for regular screening to discover prostate cancer at least once a year, especially for men above age 40.

Speaking on” Diabetes and the Eyes”, Dr. Samuel Ocheni, a Consultant Ophthalmologist, said diabetes has the capacity to affect the eyes.

The ophthalmologist called for prompt and regular checkups of the eyes at least yearly, so that any defect detected can be easily treated.

Over 100 people which include staff, patients, and residents were screened for diabetes such as sugar level, blood pressure, and weight, among others.

Mrs. Titilayo Ajibade, 59, a diabetic patient for over ten years, thanked the management and staff of FMC Lokoja for more enlightenment on how to properly manage their health.