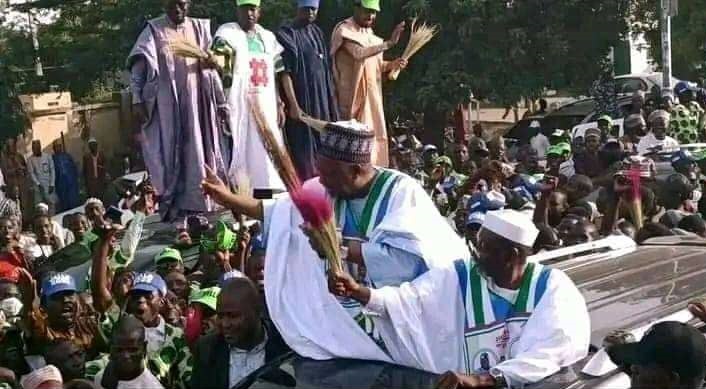 All Progressive Congress (APC) Jigawa state chapter has flagged off its gubernatorial campaign and promised to deliver more dividends of democracy to the people of the state.

Speaking at the flanging off of  Jigawa Northeast Zonal camping held in Hadejia, the state Governor who is also chairman of the Campaign Committee Alhaji Muhammad Badaru Abubakar said, his government had fulfilled 99  percent of its campaign promises.

Governor Badaru noted that the APC-led state government took .over the state in 2015 with an empty treasury and over N90  billion in contractual liabilities, but they were able to clear all the liabilities and executed projects/programs that improved the social and economic life of the citizens.

Badaru described the party gubernatorial candidate, Malam Umar Namadi as a competent, capable, patriotic, and obedient person who will continue providing dividends of democracy for the growth and sustainable development of Jigawa the state.

“Malam Umar Namadi was a state commissioner of finance and now my deputy, so I am optimistic that if voted into power he will continue implanting APC Manifesto, with more projects and programs for social and economic development,” Governor Badaru declared

“Our Scorecard on Education, Health Agricultural development, empowerment and poverty eradication, Industrial program, and manpower development is there written in our 7 years compendium, it speaks for us, and if voted we will do more”

He then called on the people of the state to vote for APC candidates at all levels in the forthcoming general election being the only party with a clear manifesto for state and national development.

In his speech, the APC gubernatorial candidate Malam Umar Namadi promised to continue from where Governor Badaru stop and assured not to betray the trust repose on him if elected.