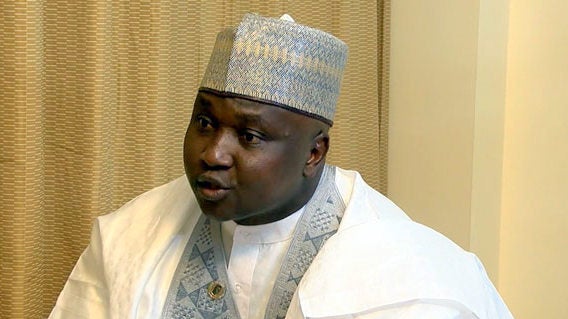 Psychiatrists indicate that from time to time, every person exhibits signs of dementia or madness. The simple and common instances are such as looking into the mirror and laughing at oneself or talking to oneself – all alone (soliloquy).

At a higher level, however, such momentary dementia could manifest in physical combat with people or any strange act of venting one’s anger and fury on others publicly.

The recent series of attacks displayed by Alhasan Ado Doguwa, Majority Leader of the House of Representatives, during altercations with a fellow politician and later, with a journalist in Kano, sent many people mesmerized by his conduct, which may be aptly interpreted in line with the aforementioned psychiatric theory.

However, others interpreted Doguwa’s action as his known predisposition of easily getting into a bout of anger, and brazenly attacking whosoever engages him, without qualms.

Some political supporters of the man in Kano see that as bravery, being a no-nonsense somebody. That way, he could send shivers to his opponents, making them psychologically weak, terrified, and cheap for defeat socially, politically, and even at the election booth.

Recently, the story of Majority Leader, Alhasan Ado Doguwa hurling a cup or tumbler at Kano State former Commissioner for Local Governments, Alhaji Murtala Sule Garo, and later on, punching at the Reporter of the Leadership Newspaper in Kano, Malam Abdullahi Yakubu, made the headlines of many dailies and Radio news in Kano and around Nigeria. Similarly, social media platforms were awash with the trending story.

Doguwa’s notorious style of politics is not hidden, nor a surprise to many Kano people. Incidentally, he grew up and was groomed in the Doguwa and Falgore axis of Kano State, a place famous for harboring fierce hunters and daredevil local vanguards (‘yantauri).

It is not uncommon for Alhasan to often be fingered amidst groups of fierce-looking and arms-wielding vanguards heading to disperse political opponents.

In fact, camera footage and video clips of the outing captured some leading Gandujiyya political group members, including serving legislators and senators participating in the anti-Kwankwaso campaign.

Doguwa (fancifully nicknamed Dan Ado) was particularly depicted wielding dangerous local weapons and openly lampooning Kwankwaso, (his ex-mentor), calling “death on him” – challenging him and his entourage to dare pass through the barricaded junction.

Typical of the ‘yantauri people, Ado easily and zealously trembles at the rhythmic beatings of the war drums of ‘Gangi’. With hands held up and open apart, he loudly boasts, brags, and calls the bluff of opponents out there. Like a machete-wielding warlord guarding his territory, so does Alasan uses vanguard power to secure votes in his constituency.

Violence seems to be the backbone and the open secret of Alasan’s series of succession to his position at the federal legislature.

Apart from his cunning loyalty and submissiveness to the governor in power, apparently to secure his ticket, violence (contrary to popularity), is his second strategy.

In fact, the last rerun election that saw Doguwa to his current ascension to power is a crystal example in question. With the support of the state government and political Colleagues, Ado harnessed all the dreadful vanguard groups imagined and placed them at strategic voting points, to be able to scare away opposition voters and secure a win.

However, following the recent developments in Kano politics, Ado’s political fortune may seem to be heading to the rocks, as he is seen to be caught by his nemesis, having met his Waterloo.

Prominent threats facing Alasan now are probable denial of his ticket to the legislature in the next dispensation, stripping him of his traditional title in Rano Emirate, and the Court action charging him of physical assault on Abdullahi Yakubu, Kano Correspondent of the Leadership Newspaper.

With these hardly surmountable problems before Ado, it might serve as the proverbial last straw to break the Camel’s back.

More so, the Kano branch of the Nigerian Union of Journalists, NUJ supported by several human right groups are solidly behind and are pursuing the Court case, to secure justice for Malam Abdullahi Yakubu these groups vowed to follow the case to its logical conclusion.

Inuwa writes from the Department of Linguistics and Foreign Languages, Bayero University, Kano.

Church Dedication: Why, and How?