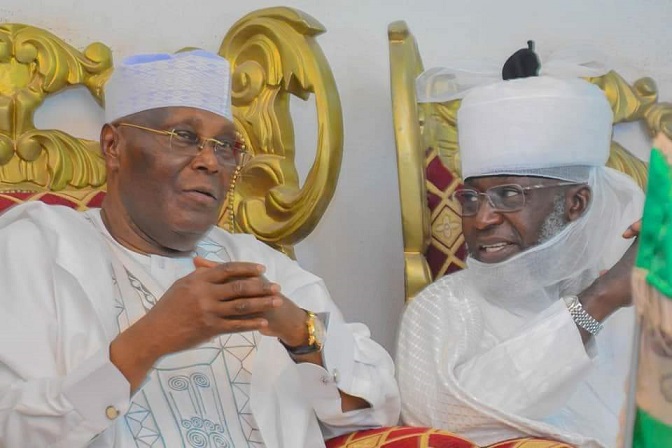 Speaking during the presentation of the donation to the Emir of Hadejia in his palace, Atiku commiserate with victims who lost their loved ones, houses, farmland, and other properties.

Atiku noted that the donation is aimed at assisting the victims but not replacing what they lost, and urged them to accept the disaster as an act of destiny.

The PDP Presidential candidate then called on the state government federal, communities, and other partners to join hands in finding a lasting solution to .he disaster, including fighting against environmental degradation, tackling poor town planning, and low-quality buildings among others in the country.

In his response, the chairman council of emirs His highness, Emir of Hadejia, Dr. Adamu Abubakar Maje thanked the PDP presidential candidate for his kind donation which he described as a sign of the Spirit of Humanity.

The emir assured Atiku and other people who presented a similar donation that, his committee will ensure judicial distribution to the targeted victims.

The Emir also solicited more support for the state flood victims and also prays Almighty Allah to reward Atiku Abubakar for the donation.

According to the Federal Ministry of Humanitarian and Disaster Management report, Jigawa is the worst hit state by this year’s flooding as over 135 people died, over 100,000 were displaced, and hundreds of farmlands and public infrastructures including roads, hospitals schools were damaged by the flood in the state.

Why Salary Increase May Cause More Harm Than Good, by Hassan Gimba