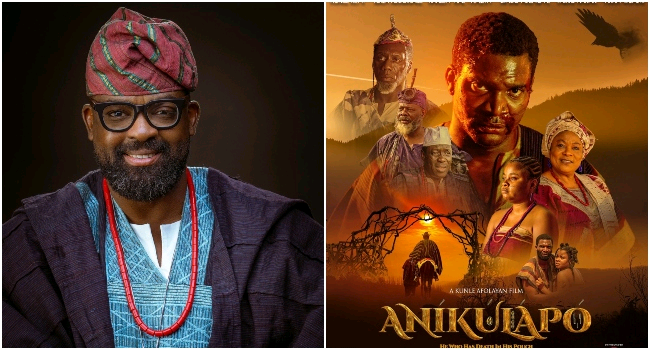 Nigerian veteran movie producer, Kunle Afolayan has disclosed how his latest movie, ‘Anikulapo’ had stirred up reactions among university professors.

The movie producer said there has been a lot of thesis, criticism and debate over my film, with professors having clashes (over them).

Afolayan made this disclosure during a session on telling indigenous stories at the ongoing Africa International Film Festival.

The movie, which was set in the pre-colonial era of the 17th century old Oyo Empire, tells the story of a sojourner who finds his way to Oyo in search of greener pastures, where he at first finds favor, but later finds love in a forbidden place.

The award-winning filmmaker, however, expressed gladness about the fact that the movie has opened up conversations.

The filmmaker was glad about the fact that one can make a decent living from doing something indigenous, noting that it is a notable thing that people are now being remunerated for telling indigenous stories.

Afolayan said “Staying true to our stories is very important. I have seen a lot of films done by Americans telling African stories. Yet, some people who are Yoruba will see some movies done in Yoruba and say something is not being done right. Some look at it from the point of view of language, some from the angle of costume, while others look at it from the perspective of history.

“There has been a lot of thesis, criticism and debate over my film, with professors having clashes (over them). For example, a professor of history could say, ‘That is not the history of Oyo’. A professor of the film would also say, ‘You are the one bringing history to a film class. For me, that is interesting. It opens up conversations.

“The icing on the cake is that one is making a living from doing something indigenous, and one is also being commissioned to do more. I feel that is the way to go.”