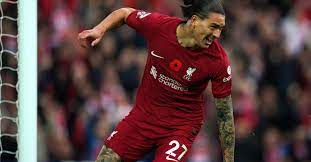 Nathan Jones’ Southampton reign got off to a losing start as Liverpool signed off for the break for the World Cup with a comfortable win at Anfield.

Roberto Firmino put the disappointment of missing out on a place in the Brazil squad for Qatar behind him by heading the Reds ahead before Saints equalised through the unmarked Che Adams.

Nunez, one of seven Reds players heading for the World Cup as it stands, made it 2-1 when he poked past Gavin Bazunu from close range before tapping home the third after Andy Robertson’s assist.

Liverpool would have won by more but for two outstanding stops by Bazunu, the 20-year-old denying both Mohamed Salah and Firmino at close range.

Reds keeper Alisson also produced a quality save to keep out Adams’ header in the 77th-minute.

Liverpool started the day eighth in the table but temporarily moved up into sixth, five points off a Champions League spot, ahead of the games to come later on Saturday and on Sunday.

The Reds were without Ibrahima Konate and Jordan Henderson – who are due to go to the World Cup with France and England respectively – while manager Jurgen Klopp was forced to watch this game from the stands as he served a touchline ban.

Yet Liverpool’s players enjoyed themselves in the absence of their German boss from the dugout as they scored all three goals in an enthralling opening 45 minutes.

Klopp will spend the next few weeks with those staying behind including Mohamed Salah and Firmino.

It was striking how all of Firmino’s outfield team-mates celebrated with him after scoring his seventh Premier League goal of the season after the disappointment of his omission from Brazil’s squad.

There was a landmark moment for 36-year-old James Milner when he came on in the second half for his 600th Premier League appearance.

Big job ahead for Jones

Jones will welcome the forthcoming Premier League break as it gives him time on the training pitch getting his ideas across to his new players.

The Welshman faces a big job keeping Southampton in the Premier League after taking over from Ralph Hasenhuttl, who was sacked following last week’s 4-1 home defeat to Newcastle.

Saints are two points from safety after one win in 10 top-flight games.

There is a risk element to Jones taking over due to his inexperience at Premier League level and time will tell if his appointment pays off.

Southampton contributed to an enjoyable game and Jones will be encouraged with how his players responded after falling behind to Firmino’s goal.

The performance of Bazunu, who was playing in League One on loan last season, was also a positive but this is a young Saints team.

As well as 20-year-old Bazunu, Southampton’s line-up against Liverpool included 18-year-old Belgian midfielder Romeo Lavia and 20-year-old defender Armel Bella-Kotchap, who is going to the World Cup with Germany.