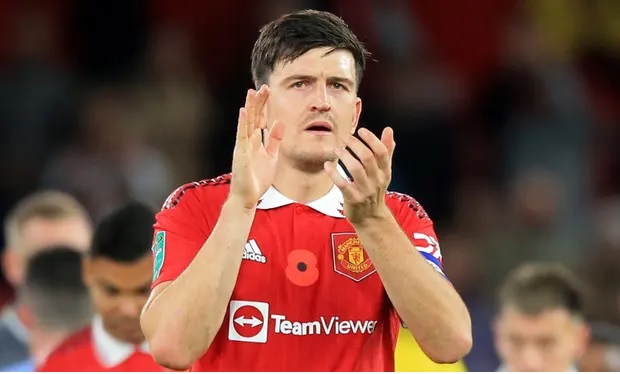 Manchester United will consider offers for Harry Maguire next summer, with Erik ten Hag intent on selling his captain to help fund a continuing overhaul of the squad. Maguire cost £80m but the club realize they may have to accept a considerable loss to sell him.

The news comes days before England’s World Cup 2022 campaign begins in Qatar, where Maguire is expected to be a first choice for Gareth Southgate. However, the 29-year-old’s stock has fallen considerably at United.

Having been made captain under Ole Gunnar Solskjær, who signed him from Leicester in August 2019, he has started only one Premier League match under Ten Hag since being in the XI for the 2-1 loss to Brighton and 4-0 defeat at Brentford in the opening two matches, and is now in effect fourth-choice center-back.

Ten Hag’s No 1 pairing is Raphaël Varane and Lisandro Martínez, and Victor Lindelöf was preferred to Maguire to partner Martínez in Sunday’s 3-1 Premier League reverse at Aston Villa in the absence of injured Varane.

Maguire signed a six-year contract that has an option to extend to 2026. The length of his deal, his salary of about £190,000 a week and his dramatic loss of form mean he may be hard to move on for a price anywhere near £80m.

Ten Hag admires the player’s professionalism but views Maguire’s sluggish pace as a problem and wants to sell him to add true competition for Varane and Martínez and enhance the quality of the defence.

The manager is also preparing to release Fred when the midfielder’s contract expires in June. United have an option to extend his deal for another 12 months but this is not expected to be taken.

Ten Hag has been impressed with Fred’s application and team ethic but is keen to overhaul a midfield in which only Casemiro has proven to be a consistent top-class performer.

Netflix has invested N9bn in Nigeria film industry in 6 years