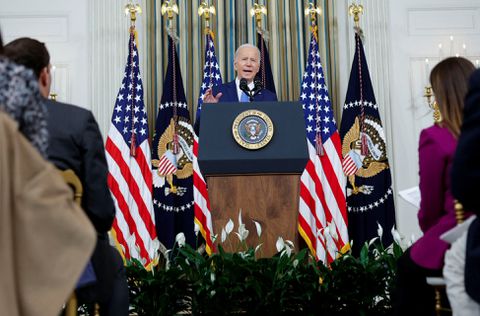 Arizona and Nevada election workers were toiling on Friday to tally hundreds of thousands of ballots that could determine control of the U.S. Senate and the shape of President Joe Biden’s next two years in office, in a vote count that officials in the two battleground states warn could drag on for days.

Either Democrats or Republicans can capture a Senate majority by sweeping contests in both states after Tuesday’s midterm vote. A split would transform a Dec. 6 runoff Senate election in Georgia into a proxy battle for the chamber.

Political analysts were anticipating a rush of campaign funds into Georgia as Republicans and Democrats geared up for the final battle of the 2022 midterm elections.

Democrats on Tuesday staved off an anticipated “red wave” of gains by Republicans, who had criticized Biden over soaring inflation and rising crime rates. Biden’s term since taking office in 2021 has been marked by the economic scars of the COVID-19 pandemic after a tumultuous four years under former President Donald Trump.

In the fight for the House of Representatives, Republicans were inching closer to wresting control of the chamber from Biden’s Democrats. House control would give Republicans veto power over Biden’s legislative agenda and allow them to launch potentially damaging investigations into his administration.

Republicans had secured at least 211 of the 218 House seats they need for a majority, Edison Research projected late on Thursday, while Democrats had won 197, not including two uncalled races that feature two Democrats running against one another. That left 27 races yet to be determined, including several close contests.

The Republican House leader, Kevin McCarthy, has already announced his intention to run for speaker if Republicans take over, an outcome he has described as inevitable.

Biden told reporters on Thursday he and McCarthy had spoken but said he had not abandoned hope that Democrats could prevail in the House, despite the tough odds.

“It’s still alive,” he said of their chances.

Biden portrayed the vote as a fight to save democracy after Republican nominees promoted Trump’s false claim that the 2020 election, which Biden won, was fraudulent. His Democrats labeled Republicans as extremists, pointing to their desire for legislation banning abortion nationally and cutting spending on social programs for the elderly and poor.

Officials overseeing vote counting in the Arizona and Nevada Senate races, where Democratic incumbents were trying to fend off Republican challengers, have said it could take until next week to tally uncounted mail-in ballots.

Their work is slowed by the need to match signatures on mail-in ballots to voter registration signatures, especially in Arizona after high numbers of such votes were dropped off on Election Day.

A senior elections official in Arizona’s most populous county said on Thursday that workers there had a backlog of over 400,000 uncounted ballots.

“We will be working Friday and Saturday and Sunday, and move through these ballots. The staff here are working 14 to 18 hours a day. We are doing what we can,” Maricopa County Board of Supervisors Chair Bill Gates told reporters.

Some of Trump’s most high-profile endorsed candidates lost pivotal races on Tuesday, marring his status as Republican kingmaker and leading several Republicans to blame his divisive brand for the party’s disappointing performance.

The outcome may increase the chances that Florida Governor Ron DeSantis, who routed his Democratic challenger on Tuesday, opts to challenge Trump for the 2024 presidential nomination.

While Trump has not officially launched a third White House campaign, the former president has strongly suggested he will do so and is planning a “special announcement” at his Florida club on Tuesday.

Trump lambasted DeSantis in a statement on Thursday, taking credit for the governor’s political rise, while attacking critics on his social media site, Truth Social.

Even a narrow Republican House majority would be able to demand concessions next year in exchange for votes on key issues such as raising the nation’s borrowing limit.

But with few votes to spare, a Republican speaker might struggle to hold the caucus together – particularly the hard-right faction that is largely aligned with Trump and has little interest in compromise.