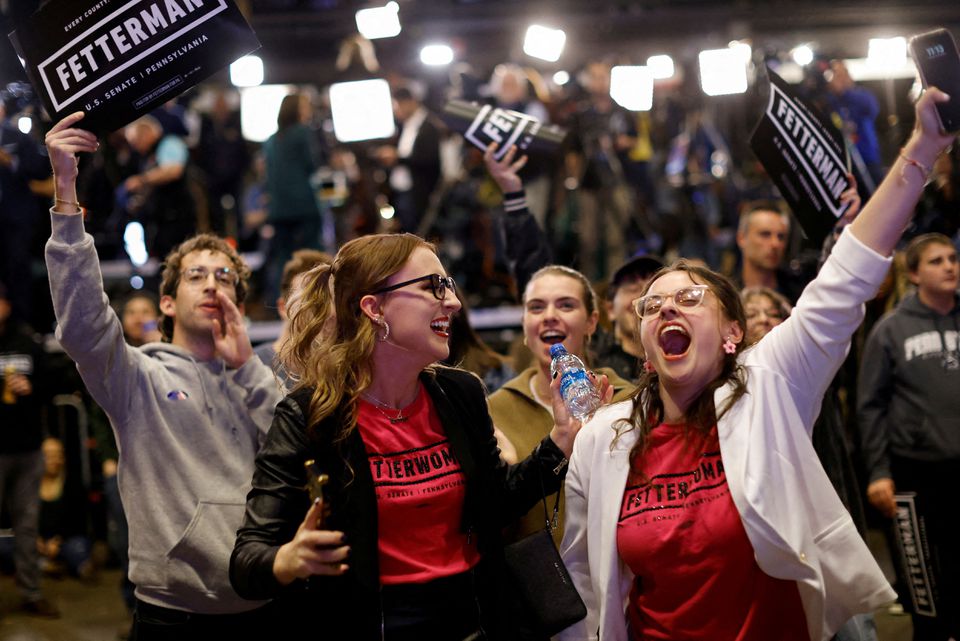 Two days after Americans went to the polls, the political world remained on tenterhooks on Thursday, with both chambers of the U.S. Congress up for grabs as election officials painstakingly tallied hundreds of thousands of votes in a process that could take days to resolve.

Republicans have secured at least 211 House of Representatives seats, Edison Research projected, just seven shy of the 218 needed to seize control from Democrats and put an end to President Joe Biden’s legislative ambitions.

But 27 races are yet to be determined, including 16 of the most competitive based on a Reuters compilation of the leading nonpartisan forecasters.

The fate of the Senate, meanwhile, rests with a trio of fiercely contested states. Either party can win a majority by sweeping the races in Nevada and Arizona, where counting late-arriving ballots is expected to last several more days.

If those races don’t deliver a majority for either party, Senate control will be decided in a runoff election in Georgia for the second time in two years. Democratic incumbent Raphael Warnock and Republican Herschel Walker will go one-on-one on Dec. 6 after both fell just short on Tuesday of the 50% threshold needed to win outright.

(Live election results from around the country are here)

Though Republicans remained favored to take over the House, their performance on Tuesday was seen as underwhelming. Some Republicans blamed former President Donald Trump after some of his endorsed candidates, including celebrity surgeon Mehmet Oz of Pennsylvania, lost high-profile races.

Trump’s diminished brand could further encourage Florida Governor Ron DeSantis to challenge for the Republican presidential nomination in 2024, after he won re-election with a resounding majority on Tuesday.

In a statement on Thursday, Trump took aim at his would-be rival, calling him “Ron DeSanctimonious” for a second time in recent days and taking credit for his political rise. The former president was expected to launch his third White House run next week; he sent reporters an invitation to a “special announcement” at his Florida club on Tuesday.

Even a slim House majority would allow Republicans to block Biden’s priorities and launch investigations into his administration, while setting the stage for bruising battles over pressing matters like raising the nation’s spending limit.

A Republican Senate would hold sway over Biden’s judicial appointments, including any potential Supreme Court vacancies.

Biden told reporters on Thursday he had not given up hope that Democrats could hold both chambers, saying their chances were “still alive.”

As ballots were tallied, Democrats expressed cautious optimism about both the Nevada and Arizona Senate races.

In Nevada, Republican challenger Adam Laxalt, the state attorney general, clung to a lead of less than 2 percentage points, but his advantage over Democratic incumbent Catherine Cortez Masto has shrunk as ballots in populous Clark County, which includes Las Vegas, are counted.

Arizona presented a mirror image: Democratic incumbent Mark Kelly has seen his margin over Republican challenger Blake Masters narrow since Tuesday, though he still led by more than 5 percentage points.

Bill Gates, the chair of the board of supervisors in Maricopa County, home to Phoenix, said on Thursday that counting a backlog of more than 400,000 votes would likely take until next week.

Republican gubernatorial candidate Kari Lake, who has echoed Trump’s false claims about voter fraud and whose race against Democrat Katie Hobbs remains too close to call, has accused Maricopa officials of dragging their feet deliberately, an allegation Gates called “offensive.”

“Everyone needs to calm down a little bit and tone the rhetoric down,” said Gates, a Republican.

Despite deep voter frustration over high inflation and Biden’s low approval ratings, Democrats avoided the wipeout losses that the party in power has historically suffered in a president’s first midterm election.

That was due in part to anger over the Supreme Court’s decision to eliminate a nationwide right to abortion, which led to Republican-backed bans in more than a dozen states.

“Women in America made their voices heard, man,” Biden said at a political event in Washington.

The president had also framed the election as a test of U.S. democracy at a time when hundreds of Republican candidates embraced Trump’s false claims that the 2020 presidential election was stolen.