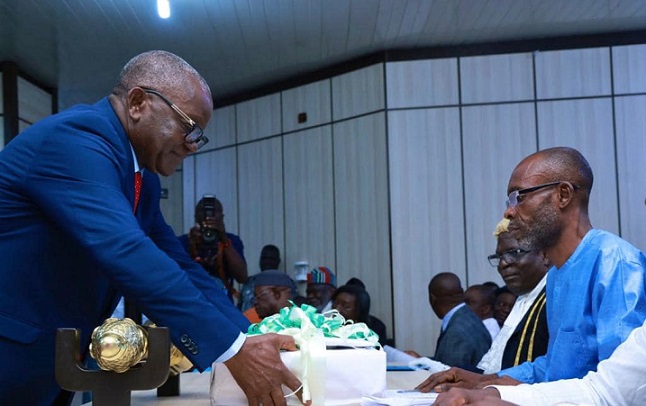 Benue State Governor, Samuel Ortom has presented the 2023 budget estimates of N179,750,090,123.40 to the Benue State House of Assembly for consideration.

In a statement, Tuesday, the Chief Press Secretary Nathaniel Ikyur disclosed that Ortom presented the budget proposal at the Chambers of the Benue State House of Assembly in Makurdi.

The budget tagged “Budget of Consolidation and Transition” has projected that the Federation Account Allocation Committee (FAAC) Statutory Revenue will be  N71,385,773,440.00. This represents 39.7% of aggregate revenue estimates; while N30bn, representing 16.7% is projected from aggregate revenue from independent sources.

A breakdown of the budget estimates according to Ortom shows that N106,191,893,868.58 representing 59.1% is proposed as total recurrent expenditure.

According to Ortom, the recurrent expenditure estimates focus on our obligation to faithfully pay the salaries of our workers and meet our obligations under our new Pension Laws and to our retired workers.

“We have also provided essential overheads expenditure, with emphasis on items of that are relevant to our quest to promote economic advancement, including recovery grants to poor households and to Small and Medium.

Enterprises to cushion the impact of COVID-19 under the auspices of the World Bank-assisted Nigeria CARES Programme,” he said.

In addition, he urged the Assembly to consider the budget estimates, Governor Ortom expressed appreciation and cooperation, and constructive engagement that has existed between the three arms of Government in the State and between the State Government and the Local Governments.

In his words, “The State Assembly has been a constructive partner in our common quest to serve and protect our people. We trust that you will continue in the same spirit by considering and passing the 2023 Budget which I now lay before you.”

In his remarks, the Speaker of Benue State House Assembly, Hon. Titus Uba thanked Governor Ortom for the timely presentation of the budget and assured him that the Assembly will accord the budget the priority it deserves for speedy passage.

“On behalf of my colleagues and staff, I thank you for standing firm in defense of the Benue people against repeated heinous invasions and attacks on our people.

“Again, the House is thankful to you for the timely presentation of the budget proposals for 2023. We all know that the electioneering campaigns for the 2023 elections are in top gear and we are neck-deep involved either as candidates or critical stakeholders.

“I wish to assure you, Your Excellency, that the House will accord the processing and passage of the budget proposals you just laid before us, the urgency it deserves,” the Speaker stated.

He charged all Ministries, Departments, and Agencies to cooperate maximally with the various Committees of the house stating that they would soon be invited for the budget defense exercise.

The Speaker accordingly referred the budget estimates to the Rules and Business Committee of the House to be slated for second reading.