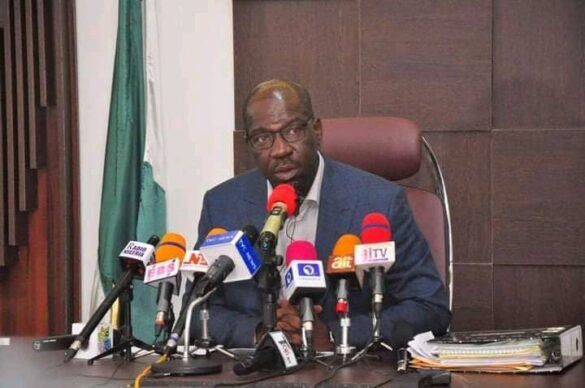 Edo State Governor, Mr. Godwin Obaseki has reassured victims of land grabbing in the state that his administration will put an end to the menace while reiterating that the perpetrators of the crime will be made to face the full wrath of the law.

The governor gave the reassurance on Tuesday at a stakeholders’ engagement meeting on the New Town Acquisition organized by the Ministry of Physical Planning, Housing, Urban and Regional Development in Benin City.

According to him, the issue of land grabbing came to the fore as the State Government took drastic action to reacquire its land for the New Town Project.

“With the recent uproar from some affected persons, the state government has sustained its enlightenment campaign on what it aims to accomplish in the area.

“If there is no government there would be anarchy, Obaseki said.

He added that his administration is committed to creating an environment where there is law and order, to make Edo the pride of the country as well as to encouraging investors to invest in the state.

Obaseki emphasized that “nobody will invest in a place where they are not sure of anything” and assured that the government does not have the intention of collecting people’s lands.

The governor cautioned that his administration will not tolerate the illegal sales of land by land grabbers in the state and maintained that efforts have been put in place to bring the perpetrators to face the wrath of the law as they would be made to repay the money collected from the victims in the communities where the New Town is to be situated.

In a bid to provide succor to the people, he promised that his government will consider returning some of the land to the victims and compensate those who have done proper documentation of their land with a Certificate of Occupancy (C of O).

In her presentation on the New Town Project, the Commissioner for Physical Planning, Housing, Urban and Regional Development, Ms. Isoken Omo, noted that the stakeholders’ meeting became imperative in view of the wrong perception of the State Government’s action to repossess its land in areas earmarked for the New Town project.

She gave a breakdown of the various efforts that the Government had made in resolving issues pertaining to the repossession of the land as; stakeholders’ engagement with the affected communities and mechanisms put in place to alleviate the plight of victims.

The Commissioner further explained that 499 persons who acquired lands in the affected areas have been enumerated, and urged others to follow suit.

She noted that out of the 499 persons enumerated, only 14 persons possess their C of O and reiterated the importance of getting a C of O and the need to verify any land before its acquisition in order to avoid the problem of buying government land.

Ms. Omo further assured that those already enumerated will be compensated from the areas allocated for residential settlement in the New Town Plan.

She said that compensation will be based on what was on the ground in the land at the point of the State Government’s acquisition in 2017.

Earlier, the Commissioner for Communication and Orientation, Chris Nehikhare, said that the government has always enlightened the people regarding ways to acquire land and processes to follow in building houses in the State.

He noted that the State government has erected signposts on several government lands, which oftentimes have been taken for granted by land grabbers.

Nehikhare made reference to an incident that occurred at Uteh Community over the weekend where someone decided to erect a perimeter fence on a road, thereby preventing access to the road by the residents of the locality.

The event had in attendance members of Ogheghe, Obayantor 1, Obagie N’Evbuosa, Okoroma, and other neighboring communities, the Head of Service, Anthony Okungbowa Esq, the Commissioner, Ministry of Communication and Orientation, Hon. Chris  Nehikhare; the Managing Director of EdoGIS, Mrs. Grace Osaro; and other members of staff of the Ministry of Physical Planning, Housing, Urban and Rural Development.