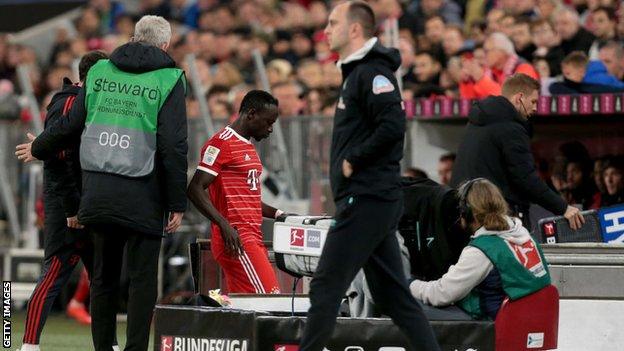 Sadio Mane will have a scan on a knee injury suffered in Bayern Munich’s 6-1 victory over Werder Bremen that moved them four points clear at the top of the Bundesliga.

Mane went down on 15 minutes and had to be replaced by Leroy Sane.

It comes just 13 days before Mane’s Senegal play their first game at the 2022 World Cup against the Netherlands.

“He’ll have to have an X-ray to see what’s happened,” said Bayern coach Julian Nagelsmann.

“He took a blow to his tibia plateau [the head of the shin]. It’s a painful spot.”

Bayern, meanwhile, cruised to victory with Serge Gnabry scoring a hat-trick.
Former Liverpool player Mane went straight down the tunnel for further treatment after being substituted.

He is a key player for African champions Senegal, who face the Dutch in their opening Group A game on November 21 before taking on hosts Qatar, then Ecuador.

Despite concern over the two-time African Footballer of the Year, Bayern’s assistant coach Dino Toppmoller later played down the possible extent of the injury.

He said: “[It’s] nothing too serious and his participation in the World Cup should not be in jeopardy.”

Jamal Musiala fired Bayern ahead on five minutes, however they were pegged back shortly after as Bremen put together a slick passing move before freeing Anthony Jung on the left to slot past Manuel Neuer.

Bayern turned on the afterburners to score three in eight minutes, Leon Goretzka chipping home alongside two from Gnabry to put Bayern 4-1 ahead inside half an hour.

It could have been worse for the visitors, had goalkeeper Jiri Pavlenka not saved Eric-Maxim Choupo-Moting’s penalty.

Bayern eased off until the latter stages, with Gnabry scoring his third on 82 minutes and French teenager Mathys Tel adding gloss to the score line.

Second-placed Freiburg can move back to within a point of Bayern when they travel to face RB Leipzig on Wednesday.