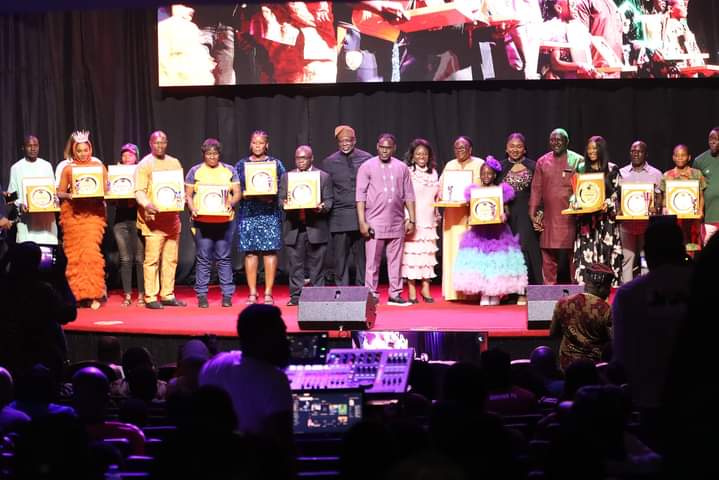 It was a moment of glitz and blitz during the 2022 Sheroes Awards ceremony when outstanding Nigerians were honored in spectacular ways in line with their numerous attainments and contributions to women’s sports development.

At the event which was held inside the prestigious Merit House Maitama Abuja, many sports personalities from all walks of life gathered in a relaxed atmosphere of celebration.

In a keynote address, the immediate past 1st Vice President of the Nigeria Football Federation (NFF), Barr. Seyi Akinwunmi, who went down memory lane, expressed optimism that women’s football in Nigeria and part of the world “is the next big thing”.

“The Women’s Super League in the UK started in 2010. Today we have players there who earn huge money. We had 11m people watching the World Cup finals. Five years ago, the highest attendance in women’s football was 3000.

“We recently had over 60000 who watched Barcelona vs Atletico Madrid. Agencies have started taking a special interest in the game. We can win the World Cup if we take advantage of what we have.

“Many companies want to invest in women’s football. They are coming to Nigeria. These organizations are ready to pump money into the women’s game.”

Also speaking, one of the awardees and NFF executive board members, Rt. Hon. Margaret Icheen, while revealing how she rose from grass to grace in her chosen life career, admonished young women footballers to be focused and determined.

Host and President of Ratels Sports Development Foundation (RSDF), Barr. Paul Edeh said passion has remained his driving force in his determination to contribute to women’s football development in Nigeria and beyond.

Barr. Edeh whose Foundation sponsors the ongoing Sheroes Cup, a pre-season tournament annually, assured that the competition and awards event will continue to get better.

He made it clear that those who were honored at the event got it based on merit, and that the Foundation didn’t collect any gratification in exchange for the award.

“I have always desired to contribute my quota in making society, especially the women better. It has not been easy, but my team and I have always tasked ourselves and we are motivated to do what we do.

“Everyone no matters your status is expected to contribute his or her quota to make our society a better and safe place to live,” he said.

A total of 12 individuals and organizations were honored at the event.

Also, Ruqayyah Adeboye (Sheroe Humanitarian of the year), Nelly Orisakwe (Sheroe Women Football Grassroots Coach of the year), and Ayisat Yusuf-Aromire (Sheroe Girl-Child Advocate of the year) were presented with the awards.

There was also a posthumous award for late Alhaji Tewogboye Oyewole as Sheroe Pioneer of Women’s Football in Nigeria.