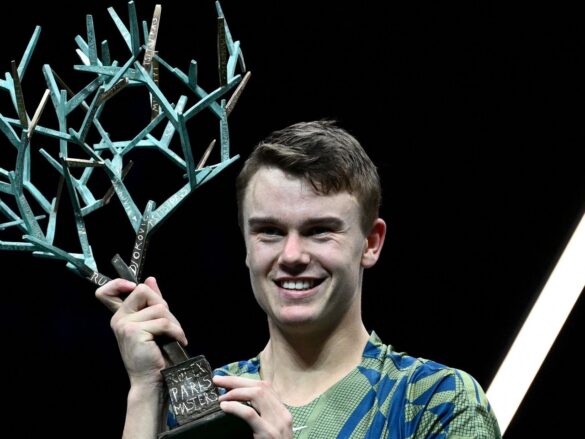 He becomes the youngest winner of the Paris tournament since Boris Becker in 1986.

The victory will lift Rune into the top 10 for the first time when the new world rankings are published on Monday.

“I’m not happy that you beat me, but on the other hand I’m happy for you because I like your personality, you’re a very dedicated guy who loves tennis,” Djokovic said post-match.

“You’ve put in a lot of hours of hard work, it’s paying off for you and your future is bright.”

World number seven Djokovic broke for a 3-1 lead in the opening set but Rune broke early in the second to then take it to a deciding set.

The Dane also recovered from being 3-1 down in the third before breaking for 6-5 to serve for the match.

He saved six break points against the Serb in the final game before securing the title after two hours and 34 minutes.

“You’re one of my favorite players, I’ve watched you since you were a kid,” Rune told Djokovic after winning his first Masters title.

“It’s a pleasure to share the court with you.

“I really enjoyed my time at the tournament here and I can’t wait to be back here next year.”

In the men’s doubles final in Paris, Great Britain’s Neal Skupski and his Dutch partner Wesley Koolhof claimed a 7-6 6-4 victory over Ivan Dodig and Austin Krajicek.

It is their seventh title of the season and means they end the year as the world’s number 1 doubles pair.
(BBC)