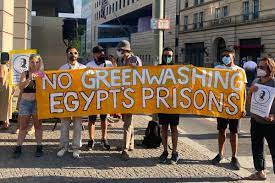 Human rights NGO, Human Rights Watch, denounced on Sunday that the Egyptian authorities have arrested dozens of people who have called for demonstrations in the days leading up to the COP27 climate summit that started on Sunday in the tourist resort of Sharm-el-Sheik.

According to the organization, authorities ordered all taxis in the area to install cameras for security agencies to monitor passengers and drivers.

The organization also criticized the registration process implemented by the Egyptian authorities, saying it was designed to limit public participation in the summit.

Among the arrests in the lead up to the summit was that of Indian climate activist Ajit Rajagopal as he was about to start an 8 day march from Cairo to Sharm-el-Sheik.
(Africanews)