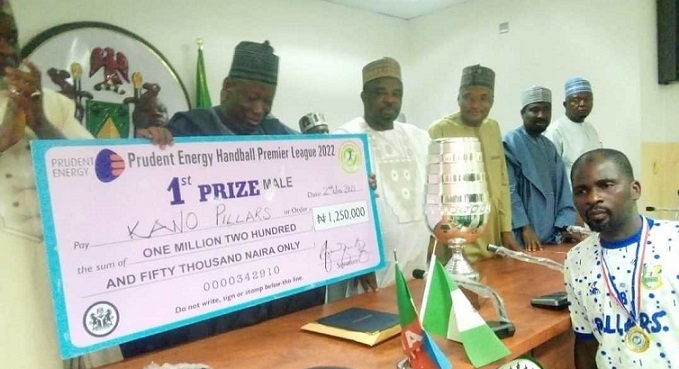 In his remarks, Dr. Galadima recalled that in November 2021 he hosted the team after their successful outing in Abuja where they emerged champions.

Galadima thanked the Ganduje and the government of Kano state for the warm reception and immense support accorded the team throughout the championship in 2021 and the team’s outing in Niger Republic.

He also appreciated the government for its support in the 2022 championship competition in which KPH club emerged as champions again.

Galadima announced that the team emerged champions back to back. In their recent outing in Lagos, they played 24 matches without losing any. They also won 6 individual prizes and a cash prize of One Million Two Hundred and Fifty Thousand Naira only.

The State Sports Chairman urged the government to support the team again by sponsoring them to participate in the African Championship when the venue is finally decided by the organizers.

He then acknowledged the heavy burden on the government and lamented the inability of the private sector to take part in sponsoring sporting activities.

He finally assured the government that the team will strive to keep Kano State and Nigeria proud.

Responding, Governor Ganduje appreciated the excellent performance of the club and said Kano is proud of them.

He assured the team that the government will sponsor them to the Continental championship when a venue is eventually decided and announced the Kano State Government’s cash gift of Five Million Naira (N5m)to the team.

The government will organize a special dinner in honor of the club, he added.

The governor also urged Galadima to advise the government on how the private sector could be involved in sponsoring sporting activities in Kano.

In another development, Dr. Galadima urged the State Government to support KSSC in its efforts to represent the State in the forthcoming 2022 National Sports Festival in which the Commission had arranged for the State to participate in 24 events with about 350 athletes and officials.