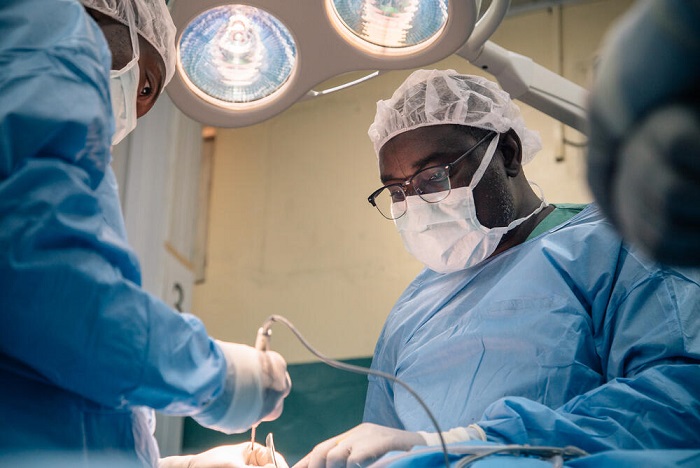 The surgical intervention was a part of the activities line-up to mark NOMA National day in the state.

Noma is orofacial gangrene, mainly occurring in malnourished children debilitated by disease and living in the developing world.

The Sultan of Sokoto, Alhaji Dr. Muhammad Sa’ad Abubakar III who is also the champion of NOMA, expressed appreciation for the works and achievements recorded so far by MSF.

The Sultan who was represented by the District head of Wurno, Alhaji Abubakar Chigari Alhassan commended MSF for supporting Nigeria and Sokoto state in the area of treatment and prevention of NOMA Diseases.

“We will continue to galvanize support for MSF for its activities to succeed In Sokoto state and the country at large.

“MSF Should continue to support the state on NOMA Diseases and health-related issues, especially now that IDPs including women and children are camped in and around the state Metropolis.”

He noted that MSF had over a decade been responsive and doing well, with commensurate records of achievements to show in its intervention activities in the health sector.

According to the Sultan, MSF is one active stakeholder in addressing public health-related issues that have for years, created and exhibited living examples of what health intervention has positively impacted.

He further expressed optimism that MSF would in no time roll back Noma disease to zero level through preventive and curative measures.

According to the Chief Medical Director of Noma Children’s Hospital, Doctor Shafi’u Isah Gwadabawa, the hospital has over time treated patients across 10 states in the north.

He added: “The hospital has significantly improved by focusing on detecting, treating, and preventing Noma which are primary to MSF.

“As a build-up, we are strengthening engagements in the area of training of both community and health care workers across 19 out of 23 LGAs in Sokoto state.

“We hope to extend a similar activity to Kebbi and other states of the Northwest and beyond”, he said.

Meanwhile, in his presentation, Dr. Suleiman Ibrahim of the University of Maiduguri Teaching Hospital said children between 2yrs and 6 yrs were more vulnerable to Noma disease which he attributed to poverty as a result of malnutrition among other risk factors as poor personal hygiene (oral), child killer diseases as measles.

He decried the low rate of proteinous food intake among children while noting that ” it is surprising that in northern Nigeria which has large proteinous food but not consumed.”

In the same vein, Dr. Peter Ajanson who highlighted Noma at the global level noted the rate of zero access to general immunization in addition to the poor health system, incapacitated PHCs, distance, and high cost of accessing treatment among other factors responsible.

According to him, the statistics were based on the NBS, Bill and Melinda Gates Foundation and Garvey survey reports revealed that the northeast has 27%, the northwest 27%, and the north central attracts 12%.

The Head of Mission, Mohammed Ali Omar who doubles as Deputy Head of Mission Operations while delivering his address stated that the MSF  mission has conducted 4000 NOMA Surgical Interventions since its commencement in 1999  to date.

He said in Sokoto state the first surgical operation of NOMA disease was conducted in 1995 when the first team visited the state for a Medical mission.

“Within the year 2020, the MSF mission could only perform 3 operations due emergence of Covid-19 which negativity affect activities of MSF and many other health-related issues across the world, adding that had already covered 19 out of  23 local Government areas of Sokoto state.”

“We intend to extend our activities to Kebbi state and other regions of the country through early detection and prevention of the disease” we admitted 1300 NOMA Patients with 1200 successful operations.