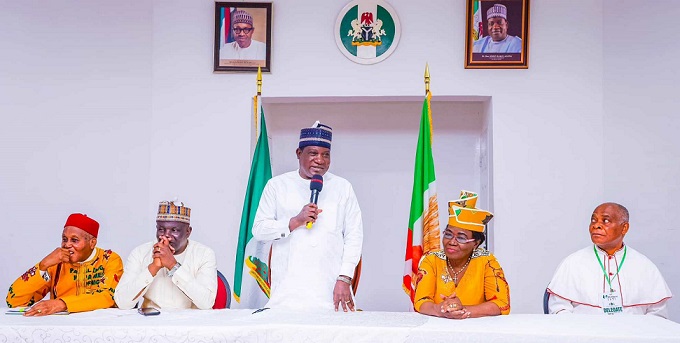 Plateau State Governor, Simon Bako Lalong has promised to return missionary schools to their founders as soon as the Committee set up to look into the matter submits its report.

His spokesperson, Dr. Makut Simon Macham in a statement on Sunday said he made the remarks while thanking the Papal Knights and Medalists for their visit and said it was heart-warming for Plateau State to host the Association which has done a lot to preach the gospel of Jesus Christ and raise leaders who have made an impact in different fields.

The Association of Papal Knights and Medalists in Nigeria in concluding their 14th National Conference in Jos paid a courtesy visit to Governor Simon Bako Lalong at the Government House Rayfield where they prayed for him and blessed him.

National President Dame Esther Uduehi praised the Governor for his commitment to service and for doing his best to change the narrative in Plateau State since he assumed office which has made the State safe and attractive once again.

She said his Government had done a lot to improve the lives of the people through projects and programs that are visible. She charged him to sustain this tempo in the coming months so as to leave an enduring legacy for the people.

Uduehi also appreciated his devotion to the Catholic Church and constant involvement in activities related to the gospel’s propagation.