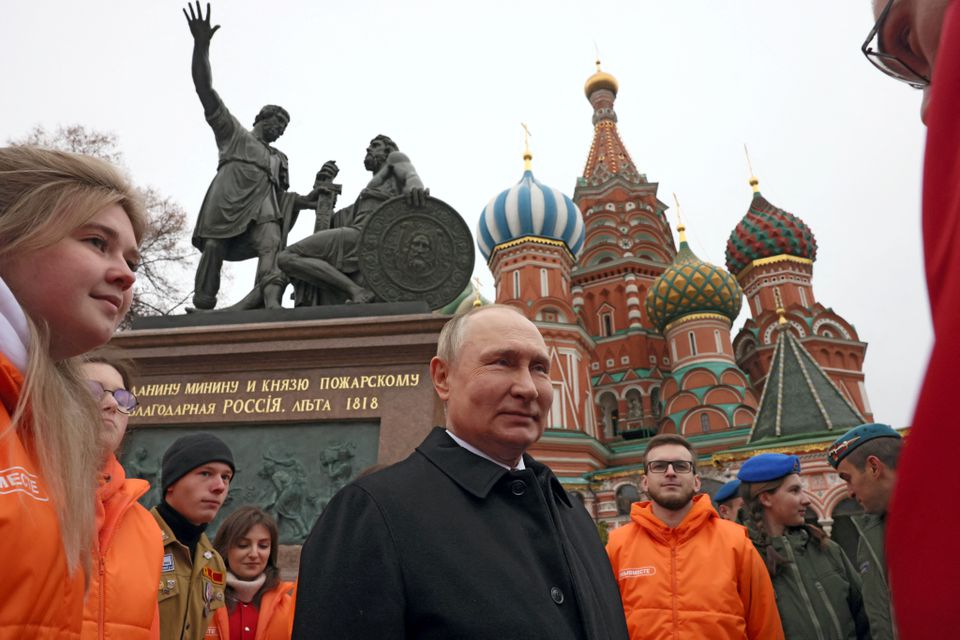 Russian President Vladimir Putin publicly endorsed the evacuation of civilians from parts of Ukraine’s southern Kherson region on Friday, the latest sign of Russia’s retreat in one of the most bitterly contested areas in Ukraine.

“Now, of course, those who live in Kherson should be removed from the zone of the most dangerous actions, because the civilian population should not suffer,” Putin told pro-Kremlin activists as he marked Russia’s Day of National Unity.

Moscow has already been ferrying people out of an area it controls in Kherson on the west bank of the Dnipro River, and this week announced that the evacuation zone would also include a 15 km buffer area on the east bank. But the comments appear to be the first time Putin has endorsed the evacuations personally.

Russia says it has been taking residents to safety from the path of a Ukrainian advance. Kyiv says the measures have included forced deportations of civilians, a war crime, which Russia denies.

Putin’s comments came amid signs Russia could be preparing to abandon its military foothold on the west bank of the Dnipro River, including Kherson’s regional capital – potentially one of the biggest Russian retreats of the war.

On Thursday, Kirill Stremousov, deputy head of the Russian-installed occupation administration in Kherson, said Russia was likely to pull its troops from the west bank. In later remarks, he was more equivocal, saying he hoped there would be no retreat but “we have to take some very difficult decisions.”

Late on Friday, Ukrainian President Volodymyr Zelenskiy said the fiercest fighting over the last week had taken place around Bakhmut and Soledar, in the eastern Donetsk region about 500 km northeast of Kherson.

“We are holding our positions in these and a few other areas in the Donetsk region,” he said in a video address, accusing Russia of insane stubborness for sending “tens or hundreds of thousands more people to the meat grinder.”

Pictures have circulated on the internet showing the main administration building in Kherson city with Russia’s flag no longer flying atop it. Kyiv has been wary, saying such signs could be Russian deception to lure Ukrainian troops into a trap.

A 24-hour curfew was imposed on the city on Friday, Stremousov said, adding the measure was necessary to defend Kherson from a likely Ukrainian offensive.

Ukrainian soldiers in a mechanized infantry company dug in on a tree line west of Kherson city were confident the Russians would eventually retreat, but would fight as they fall back.

Vitalyi, 48, the company’s deputy commander, said recent Russian efforts to beef up their defenses appeared aimed at protecting a withdrawal rather than holding Kherson.

“They have large amounts of tanks and people, but I don’t think they have a realistic plan to stay more than one or two weeks,” he said, as his men took advantage of unusually mild weather to improve bunkers and clean weapons amid thumps of intermittent artillery fire.

Vladyslav, a 27-year-old soldier, said he expected the Russians would fight: “We will fight as well. We have nowhere else to go. This is our home. This is our land.”

The regional capital, on the west bank at the mouth of the Dnipro, is the only big city Russia has captured intact since its invasion in February. Its loss for Russian forces would be one of the severest blows of the war.

The United States announced $400 million worth of additional security assistance for Ukraine, including refurbishing T-72 tanks from the Czech Republic and missiles for HAWK air defenses that could be used against Russian drones and cruise missiles.

The new assistance brought the amount of U.S. military aid sent to Kyiv to more than $18.2 billion since the invasion. As it was announced, President Joe Biden’s national security advisor, Jake Sullivan, met with President Volodymyr Zelenskiy and his chief of staff, Andriy Yermak, in Kyiv.

Sullivan affirmed that Washington will continue to provide economic, humanitarian and military aid with support from both Biden’s Democrats and opposition Republicans.

“We fully intend to ensure that the resources are there as necessary and that we’ll get votes from both sides of the aisle to make that happen,” he told reporters at the Ukrainian presidential administration.

Sullivan’s remarks came days before U.S. midterm elections in which Republicans are given a good chance of taking control of Congress. This has raised concerns that close allies of former President Donald Trump, who is known for an “America First” agenda, could cut or even block Ukraine aid, which must be approved by the House of Representatives and Senate.