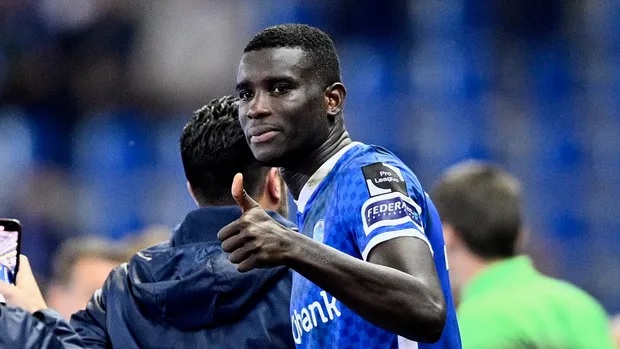 The in-form Nigeria international was on song as he scored all the goals to help his team collect maximum points and extend their lead top of the Jupiler Pro League table.

The Super Eagle scored his first goal from the penalty spot after just nine minutes.

Onuachu then got his second of the game in the 35th minute after converting a Mike Tresor Ndayishimiye assist. It was a strike that ensured his team went to the half-time break with a massive advantage.

With 20 minutes to go, the in-form Onuachu completed his hattrick after converting a Joseph Paintsil pass.

His fourth came in stoppage time after good work by Rasmus Carstensen.

With his exploits, Onuachu has proved his worth for Genk and it means he can also lead the line for Nigeria when Victor Osimhen is unavailable.

Onuachu is now the leading scorer with 12 goals from the 13 matches he has played this season.

By getting the four goals, the forward matched Wesley Sonck’s feat set against Excelsior 19 years ago.

On Wednesday, Onuachu might get a chance to play Westerlo in the Belgian Cup. With his current form, he will surely be in the team to play Anderlecht next weekend in the top-tier assignment.
(Goal)

Autopsy of Davido’s Son Confirmed that he drowned