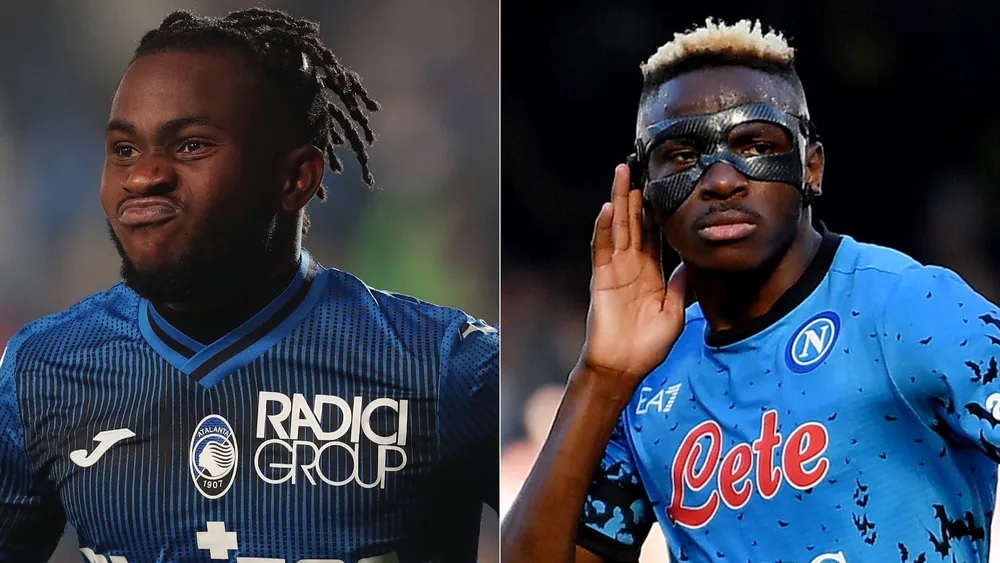 It took a hat-trick for Luciano Spalletti to wholly praise Victor Osimhen without any perceived disapproval.

Usually, the Tuscan-born tactician tends to extol the centre-forward whilst befouling any form of admiration with criticism of what the Super Eagle could have done better.

This was not the case after last week’s hat trick against Sassuolo, Osimhen’s first since switching from Lille in 2020. The 23-year-old never netted a treble in Ligue 1 either, nor did he score three times in one game in his unfortunate spell in the Bundesliga or in that reassuring time with Belgian outfit Sporting Charleroi in 2018-19.

It has taken the striker four seasons and a bit since that encouraging campaign with Charleroi, with two of those campaigns in Serie A, to net his first hat-trick in European football.

Despite scoring 56 league goals since the start of 18-19, last Saturday’s clinical finishing still felt anomalous. Osimhen netted those three goals from as many attempts on target and five efforts in total. Those carried expected goals (xG) of 1.2, demonstrating the Nigerian’s sharpness in the 18-yard box.

“Seems to me that he is making progress, he has a lot of margins because his possibilities and his flashes are not accessible to a normal player,” enthused Spalletti after the frontman’s hat trick. “On one goal he hooked a ball in the box and put the ball in the goal before the opponent intervened. It was fast and precise.”

Those strikes saw him move to the summit of the goalscorers’ standings in eight appearances (seven starts), jointly with Marko Arnautovic who has netted seven times in two more games for Bologna.

This was perhaps unexpected after the Nigerian missed over a month of action before returning in mid-October, and the recent climb in the log indicates no player will run away with this year’s Capocannoniere.

Saturday’s encounter with Atalanta not only sees first play second but pits Osimhen with compatriot Ademola Lookman. It is an added sub-plot to a fascinating encounter between two sides no observer envisaged would be in their current positions a fortnight before the World Cup’s commencement.

Napoli had lost Lorenzo Insigne, Dries Mertens and Kalidou Koulibaly in the summer, and a period of transition was expected. As for La Dea, Gian Piero Gasperini’s side were tipped to face an uphill task after ending last season outside the European positions for the first time since the 64-year-old’s appointment in the summer of 2016.

However, observers did not foresee Min-Jae Kim’s swift adaptation at centre-back or Khvicha Kvaratskhelia’s outstanding start to life in Italy’s top flight, while the supporting cast of Giovani Simeone and Giacomo Raspadori have not only made up the numbers up front to mitigate for any possible Osimhen absence through injury but contributed impressively since August.

Atalanta, for their part, have been helped by having a week between games to prepare, while Lookman’s start to life in Serie A was possibly unforeseen.

The attacker has netted five times in eight starts (12 appearances altogether) and is on pace to surpass last year’s six goals scored on loan at Leicester City—his best return in league football since turning pro.

Lookman taking to Italian football like a duck to water is even more impressive when the mid-August timing of his move to Bergamo is considered. His switch was announced in early August — with pre-season winding down — but he was netting a debut goal for the Bergamaschi nine days after.

A six-game drought followed, perhaps an upshot of the stop-start nature of his game time as he bedded in at the Bortolotti Training Centre, getting above 45 minutes in just two games during that dry spell.

Four goals in the following five games have ensued, with the only blank coming in last month’s 2-0 defeat by Lazio, an outcome that forced Gasperini to admit La Dea had not faced a team at the level of Maurizio Sarri’s men.

That was Atalanta’s recent game at the Gewiss Stadium, and they will look to avoid back-to-back home defeats against arguably the best side in Europe at the moment.

They responded to that loss against Lazio with a comfortable 2-0 win over Empoli last time out, prompting praise for Lookman despite the momentary dispute with Teun Koopmeiners over a first-half penalty.

“Lookman has scored five goals and always gave a strong contribution to the team. He has technique, pace, is a player any coach would be happy with,” Gasperini raved after last weekend’s performance. “We realized pretty quickly what he was capable of, he was convincing from the start.”
The Turin-born tactician confessed afterwards to being surprised by the club’s start to the campaign and admitted the respect he has for this weekend’s visitors should not be confused with fear.

Success for the Bergamaschi would take them to within three points of Spalletti’s crew, who target a ninth successive win in Serie A to extend their unbeaten start.

Osimhen would look to continue the scoring run that has seen him find the back of the net in three straight domestic games as Napoli seek another big win to follow successes away at Lazio, AC Milan and Roma.

Lookman is unlikely to sustain his run till the season’s denouement but the in-form talisman, whose presence has lessened the impact of Duvan Zapata’s injury-hit start to 2022-23, could match or even surpass his personal best league return this weekend.

In a round that sees Roma and Lazio face off in the Derby della Capitale and Juventus play host to Inter Milan in the first Derby d’Italia of the campaign, the Partenopei’s visit to Atalanta on Saturday has to be the fitting forerunner in a gameweek that sees six of the top seven do battle.

And it will be all shades of fun.
(Goal)