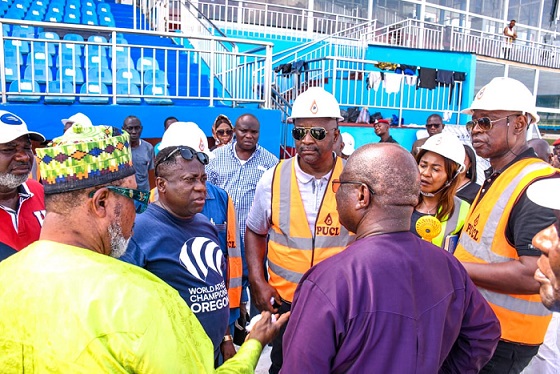 The Honourable Minister of Youth and Sports Development, Mr. Sunday Dare on Friday led the Main Organising Committee (MOC) and other officials on an inspection tour of sporting facilities at the Stephen Keshi Stadium Asaba, with a view to ascertaining the State Government’s level of preparedness towards hosting the Games.

In a statement, the Director, of Press and Public Relations of the Ministry, Mohammed Manga said the inspections were part of preparations for the National Sports Festival tagged “Delta 2022”, scheduled to take place in Asaba between November 28 and December 10, 2022.

Speaking to journalists after the inspection, the Minister expressed optimism that with the level of work going on at the Stadium, the Festival will hold in the State as scheduled.

The Minister, who stated that 11 Corporate Organisations were partnering with Delta State to ensure a successful outing, applauded their doggedness towards the completion of necessary structures that would ensure clean competitions in the forthcoming Games.

He reiterated the Federal Government’s commitment to the development of sports, which he said has led to the recent approval of the Sports Industry Policy, and the establishment of the Para Sports Department in the Ministry amongst others.

The inspection tour is part of the activities lined up for the Joint Technical Meeting hosted on Friday by the Delta State Government ahead of the competition.